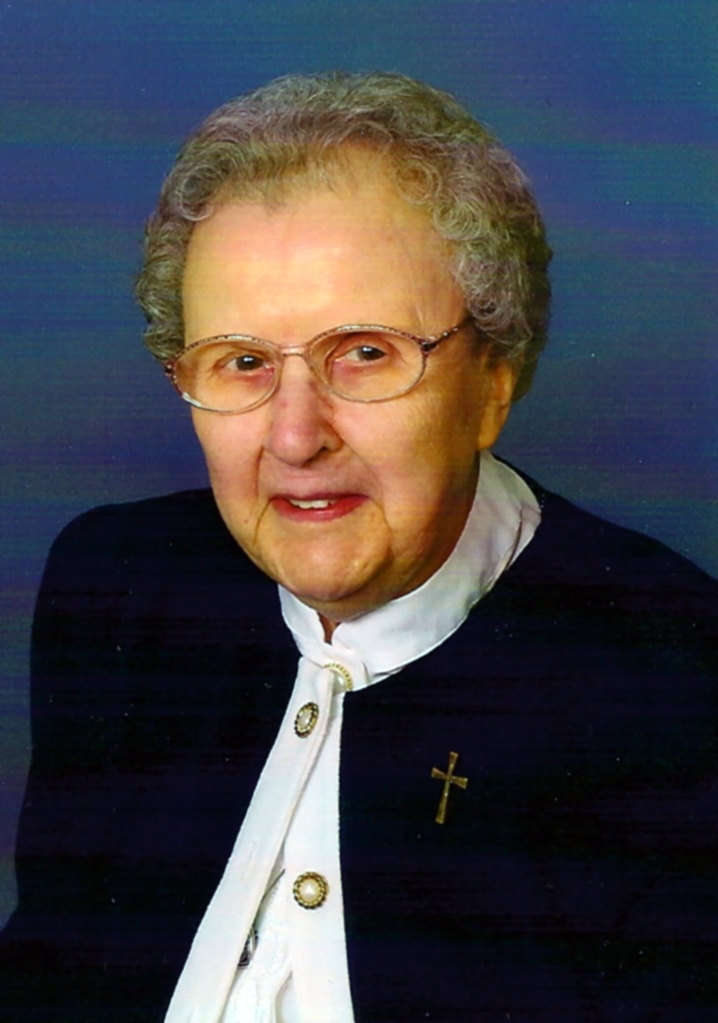 We commend to your charity the soul of our beloved
Sister Ann Phillippi
who departed this life on July 28, 2016
in the seventy-eighth year of her religious life
Age:  94 years, 11 months, 8 days

Jesus said, let the little children come to me… The kingdom of heaven belongs to such as these. (Matt. 19:14)

Anna Catherine was the eighth of ten children born to Anna (Mueller) and Peter Phillippi.  When she celebrated her 75th jubilee, Sister Ann wrote that she wanted to be like Sister Walburga Gretter, her first grade teacher and the one who had the most influence on her call to religious life.

Named Sister Mary Linus when she became a novice, she began her career as a teacher while also studying for a bachelor’s and then a master’s degree in education.  Sister Mary Linus began teaching at St. Mary’s School in Beaver Falls, PA and later at All Saints in Etna.  Transferring to the New England Province, she taught in South Weymouth and in Orleans, Mass. and also in Stamford, Conn.  Returning to her baptismal name, she was first called Sister Ann Catherine and then simply Sister Ann.  In 1973 she moved to Sacred Heart Elementary School in Kingston, Mass. where she continued teaching until her retirement forty years later.  During many of those years, Sister Ann also taught CCD to first communion classes in local parishes.  She wrote, “It was such a reward to see the children respond to God’s love for them.”

Like Jesus, Sister Ann loved the little children and they were drawn to her cheerful disposition and her loving care, as she helped each one to grow and become healthy and happy individuals.  In the summers, Sister Ann could be found in the Craft Shop at Camp Mishannock in Kingston, teaching new skills to the campers while helping them to build relationships and care for one another.

Sister Ann wrote, “Community living is very important to me – living together, working and praying together and enjoying one another’s company.  By doing this, we share God’s love and joy.”  Her positive attitude and gentle presence gave witness to her deep relationship with God and her commitment to live in love and to share God’s love with others.  Sister Ann was known to listen intently and to share her insights during the Sisters’ monthly book discussions.  Enjoying good conversation with her Sisters, even in the midst of personal health challenges, Sister Ann’s stories and laughter were enjoyed at meals and while playing games with others.

After her retirement, Sister Ann spent special times in prayer for the needs of the community.  She brought communion to the residents of Lourdes Center each morning and shared moments of prayer with them.  More recently, Sister Ann became known as “Ma Bell,” answering the telephone every weekday morning until just a few weeks ago.  The clarity of her voice over the paging system assured that no one missed a call.  She also crocheted many beautiful afghans, crafting lovely gifts for babies.  When she had the opportunity to enjoy moments with the children attending Sacred Heart, Sister Ann easily recalled the many young children she had taught.  As Sister Ann always “let the little children come” to her, we know that she is restored to the full vitality of life with God and that “the kingdom of heaven belongs” to her.