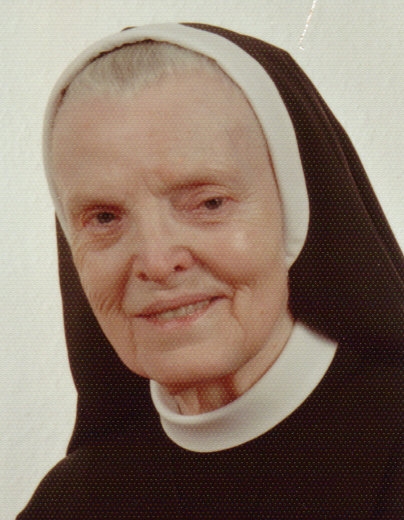 “We praise, O Lord, your Providence and
we put our trust in your loving Providence.“

Sister Anthima Adam, née Martha Adams, born on August 10, 1920, in Dietesheim near Offenbach, completed her journey here on earth on Sunday morning, January 16, 2017, at about 5:17 a.m. after being released from a few days stay in the hospital.

Sister Anthima was very undemanding and always a cheerful and contented Sister.  When asked how she was, she never complained.  Her heart was wide and large for all the concerns in the world and in the Church.  Her favorite place was the chapel. She often expressed the wish to be brought there.  Then she prayed aloud and sang all the songs which she carried in her heart and which she had learned from childhood on.  Her cheerfulness was expressed in many songs.

On June 15, 1947, Sister Anthima entered our congregation urged by the good example of her aunt, Sister Rogata.  She was invested on July 2, 1948 and professed First Vows on July 3, 1950.  At first she received an appointment for housekeeping in Neustadt and Weiskirchen.  After her Final Profession she was sent to Fehlheim and Lützel-Wibelsbach.

From 1961 to 1963, she trained for nursing in our Ketteler-Hospital in Offenbach and served there after she passed the exam until her transfer to Neustadt.  From 1972 to 1992, her last place of appointment was in the retirement home in Neustadt/ Odenwald until it was closed.  There she experienced a lot of joy since she had the opportunity, although already advanced in years, to learn to play the piano and to form a small choir with the residents.

After this period of time she moved to the former provincial house in Aschaffenburg where she supported the sisters in the convent with services in the house and in the garden.  Sr. Anthima was a sister who prayed always; others could bring to her all their concerns.  She will be in our memories as undemanding and always kind.

Funeral: Friday, 20.01.2017 at 1pm at the Altstadt Cemetery in Aschaffenburg
Afterwards:  Eucharistic celebration in the convent chapel /Aschaffenburg