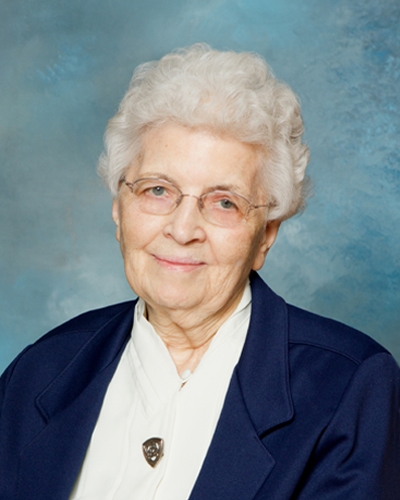 We commend to your charity the soul of our beloved
Sister Antonia Cvetan
Who departed this life on May 22, 2019
In the eightieth year of her religious life
Age: 97 years, 4 months, 18 days

“She opens her mouth with wisdom, and the teaching of kindness is on her tongue.” — Proverbs 31:26

Sister Antonia Cvetan, formerly known as Sister M. Brendan, was born on January 5, 1922, in Point Marion, PA. Both she and her brother were the beloved children of Austrian parents, John and Antonia Cvetan. At the age of 17 Sister Antonia entered the Sisters of Divine Providence from St. Joseph Parish in Braddock, PA.

Sister Antonia said that Sister Ligouri Burkhardt, a Sister of Divine Providence and her fifth grade teacher, made a great and lasting impression on her. Claiming that “religion class held me spellbound,” this spell apparently was so strong that it influenced her vocation. Like her wonderful teacher, Sister Antonia taught for almost her entire professional life. Having received bachelor degrees in elementary education and language arts from Duquesne University, education became the source of a river of wisdom which flowed to many, many children. Eventually, Sister Antonia was certified in religious education for the Pittsburgh Diocese as well.    Teaching in the Diocese of Pittsburgh as well as the Archdiocese of Detroit, she was a teacher for 38 years. Education was what she found to be the most life-giving activity. Whether she taught in grade school, CCD or summer school, her students sparked life and kindness in her mind and heart. An encouraging presence, Sister Antonia believed in her students, inspiring them to create award winning posters for the Buhl Planetarium and the National School Traffic Safety contests.

After retiring from teaching, Sister Antonia was very diligent in seeking a new direction for herself. Her wisdom led her to know herself and know when it was time to leave teaching—yet she also knew that she needed to find a new ministry. A talented calligrapher, this became a job for her when she moved to Providence Heights in her later years. She created many signs, door markers, and special place cards. In 2003, she retired from active ministry to enter prayer ministry full-time.

“And how is your noble self?” How many who knew Sister Antonia were greeted by these words? Perhaps Sister chose this greeting because she saw the dignity, the nobility in each person she met. These words also describe Sister Antonia, who gave her full attention to the person who stood before her. Like Mother Marie, who herself was of noble birth, Sister Antonia was present to whomever Providence placed in her company. In recognition of her quiet and humble ministry at Providence Heights, she was awarded the Marie de la Roche Award in 2002. This award was given in the past to sisters who ministered in internal ministry for a significant period of time to honor the service given in the spirit of Marie de la Roche. This award gave her much joy which she wanted to share with her sisters, family and friends. To mark Sister Antonia being given the Marie de la Roche Award, a fernleaf Japanese maple tree was planted on the grounds of Providence Heights. Its growth is a reminder of the years that Sister Antonia led so many children to growth and in doing so, grew herself in wisdom, dignity and compassion. May her spirit continue to lead us to grow the same.

CLICK HERE to make a contribution in honor of Sister Antonia's memory.