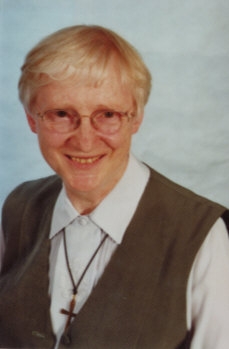 We exalt your Providence, O God, and we trust in your loving Providence.

Sister Barbara passed away on 24th September 2018, in the evening accompanied by her fellow Sisters and those who cared for her. We all were surprised how fast and quiet she went from us. Her time was fulfilled. In the last few weeks, she fell increasingly silent and reviewed the 86 years of her life. Only a few weeks ago, she said in a conversation, My life was very rich.

When she grew weaker and weaker, after three weeks in the hospital, we brought her to Aschaffenburg in our nursing department where she was lovingly received and accompanied and cared for until she passed away. Now she has gone from us and is united with all her deceased family members and fellow Sisters. She will celebrate her 60th anniversary of her profession in heaven.

Sister Barbara, born as Helga Maria Theresia Rimpler, was born on April 21, 1932 in Beuthen, Upper Silesia, as the fourth child of six children of a pious family. The war disrupted her education in school, which she could continue and complete in Vienenburg, after her family fled there. In 1950 she enrolled in the seminary for kindergarten teachers in Oberursel and there got to know our congregation. After her exam, she first worked as a kindergarten teacher and day care worker for children in the children's home Johannisstift, Oberursel and in the sanatorium for children, Bad Nauheim, until she finished her training as a Montessori-teacher and she was put in charge of one of the groups in the kindergarten of the seminary.

On August 15, 1955, Helga Rimpler entered our congregation of the Sisters of Divine Providence which she served faithfully until the end of her life in various ministries. After the celebration of investment where she received the name Sister Barbara she served in Johannisstift, Wiesbaden. In 1961, she attended the training place for handicrafts teachers in Cologne and afterwards the Higher Vocational School in Freiburg where she obtained the certificate in social pedagogy.

Well prepared she taught classes in various subjects at our sponsored seminary in Oberursel and in this way she served the education of kindergarten teachers. For one year, she assumed religious education classes as a temporary replacement at the Helen-Keller-School, Oberursel, for practical educable children. She enjoyed dealing with children with handicaps very much.

During the time as a teacher at the Social pedagogical training school she met many young people whose life was shaped by contact with her. In 1970, she was put in charge of our educational institute in Oberursel which she continued until her election as a general councillor in our international congregation. In this leadership duty at home and abroad, the love and understanding for her later ministries were shaped. After her return, she was put in charge of the children's home in Oberursel and she remained in this ministry until its closing, after a hundred years of existence. At that time, the first unaccompanied young people from Eritrea were assigned to our institution.

In 1990, Sister Barbara was elected into the leadership team of our province St. Bonifatius, Oberursel. In 1996, she started her activity as “director of formation” of the Rhein-Main-Airbase and as a volunteer she took on pastoral duties in the parish St. Leonhard, Frankfurt, for mostly Christians from other countries. Together with Sister Yohanna Yurasek, one of our American Sisters, she founded the “Providence Center,” Oberursel where for more than 20 years English speaking people found a shelter and a home, some even became members in our common faith in Providence as “Partners of Providence."

In 2011, Sister Barbara, in her old age, stood for election for the office of councillor in Emmanuel von Ketteler Province and served actively with her many talents for five years until she turned 85 and until the end of the term.

She was very closely related with her family. Her gratitude for her parents she expressed on many occasions of her life. The hard time of their flight had bound the family together. Sister Barbara was always, at any time as she herself put it, a “refugee.”

Former students, colleagues and people she accompanied for a while stayed in contact with her for decades either orally and/or by letter. May God reward her commitment for the kingdom of God and our congregation. We will miss her very much. Let us thank God for her life in our congregation. She remained on the journey with us in God´s loving care until the end of her life.

quietly, within the family circle and that of the fellow Sisters at the cemetery in Mainz-Finthen, Kettelerstraße.