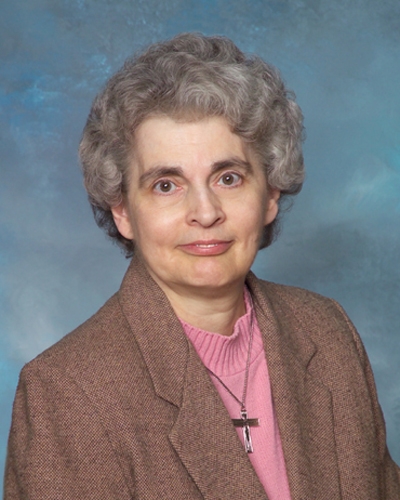 We commend to your charity the soul of our beloved
Sister Carol Tenerovich
Who departed this life on June 24, 2019
In the sixtieth year of her religious life
Age: 76 years, 5 months, 20 days

Carol Rose Tenerovich, born January 5, 1943, was the oldest of the children of Dorothy and James Tenerovich. Her siblings, Aurelia, Cecilia, Lisa, Patty, and Jim and their extended families were an integral and important part of her life through her last days.

Influenced by the joy she experienced in the Sisters who taught her at St. Alphonsus School in Springdale, PA, Carol was inspired to enter religious life. In the fall of 1959, she began her journey as a Sister of Divine Providence. Known for a time as Sister Leanne, Carol’s initial ministry was as an elementary teacher in schools in the Detroit and the Pittsburgh dioceses. Work in faith formation and as a Director of Religious Education followed, and took her from Ohio to South Carolina, to Georgia, and West Virginia. Recalling her time in West Virginia, she wrote, “God works wonders in mysterious ways! These were growth filled and exciting years.”

Living the Community charism of making God’s Providence visible to the world was essential to Carol, and she found a special niche in prison ministry. She said, “I give people on the margins a sense that God is with them. God cares about them and wishes to be their Companion in life.” For more than fifteen years, Carol was actively involved in Metanoia Retreats as part of the St. Dismas Holy Name Prison Ministry. In 2009, Sister Carol was named “Volunteer of the Year” by the PA Department of Corrections. The citation noted: “Through your dedicated service, faithful presence, and compassionate care, you have restored human dignity to those you have touched.” The Metanoia Retreat Team described Carol as a “burning torch of Christ’s light in a world of darkness and despair,” noting that through her ministry many imprisoned souls found their way back to God.

While multiple sclerosis may have slowed Carol physically, it did not dampen her enthusiasm and care for those she served. She was thankful for the ability to share God’s message with compassion and warmth. “If I had known how important and nourishing this ministry would be – I would have asked to do it my whole life…There is such a hunger among people to be right with God.”

Truly, Sister Carol was a Woman of Providence who lived the gospel message. We count on her continued intercession for her family, her Community and all those imprisoned.

CLICK HERE to make a contribution in honor of Sister Carol's memory.