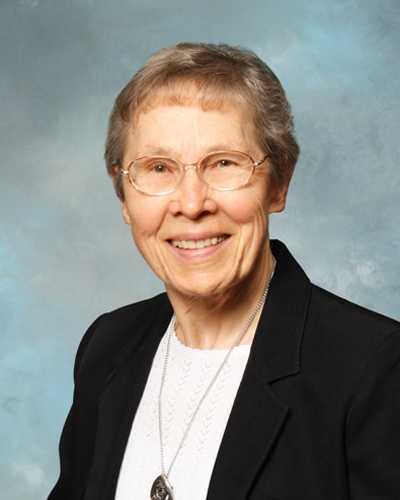 We commend to your charity the soul of our beloved
Sister Dorothy Roth
who departed this life on February 29, 2016
in the seventy-eighth year of her religious life
Age:  95 years, 4 months, 11 days

Sister Dorothy Roth lived several lifetimes making God’s Providence visible. First-born of Herman and Regina (Killmeyer) Roth, she was preceded in death by her parents, and her brothers, Herman and Kenneth. She is survived by her sister Mary Jean, whose name she shared for many years. Of the Sisters of Divine Providence who taught her throughout grade and high school at St. Martin’s, West End: "I loved and admired them, and wanted to be one of them, from about day 1.”

Dorothy was healer, educator, runner, writer of letters to the editor. Never angry, always positive and life-giving, and always requiring that the patient come first.

She was healer since 1940 when she began studying nursing at St. John's Hospital School of Nursing in Pittsburgh. In 1943, she became a head nurse there, and served in that role until 1951. When the Sisters left St. John’s, she was one of the group that went to Mercy, where she was a clinical instructor. In 1955, she became one of the pioneers at Divine Providence Hospital. She then served alternately at Divine Providence and Braddock for a number of years, but with time off to complete her education at Catholic University.

As a nurse educator, Dorothy also was a learner about human nature. When she was in charge of a school of nursing, she was an enlightened directress. She even made pillow fights legal. She thought doing that would end a lot of dormitory nonsense, but the students invented a new form of nonsense. It seems that they just had to have some rules to break.

When Dorothy became a visiting nurse, she asked to be assigned to the Hill District. One day she was mugged and then had to take time off to recover from a fractured wrist. When she went back to visiting her patients, she observed a gun-carrying guard close by, to protect her if necessary. She decided that she could not continue to serve in those circumstances, since she was an advocate for nonviolence. “I wasn't willing to be protected by a gun." The visiting nurse association reconsidered the gun policy, and then asked her to return, but she already had set her sights in another direction.

At the age of 73, Sister Dorothy went off to Puerto Rico to provide health care and pastoral support to the elderly poor. She provided care for a time at a free clinic. When she learned that people were not coming to the clinic because they had no way of getting there, she went to them. She later spoke of her 10 years in Puerto Rico as the happiest of her years in religious life. It was there that she achieved a dream of doing hands-on nursing, rather than nursing administration or nursing education.

On her return to Providence Heights, Sister Dorothy took up distance running. She participated in races and won trophies. In 2008, she finished first in the over-90 age group (but later acknowledged that she was the only entrant in that category). She said of herself, “… I did it especially for all our sisters over 70. … The point is we over 70s are not finished. In terms of love and Providence we can all make a tremendous impact on the community and on all the people whose lives we touch.”

The prophet Isaiah probably described best Dorothy’s full life: “They that hope in the LORD will renew their strength, they will soar on eagles’ wings; they will RUN and not grow weary.”