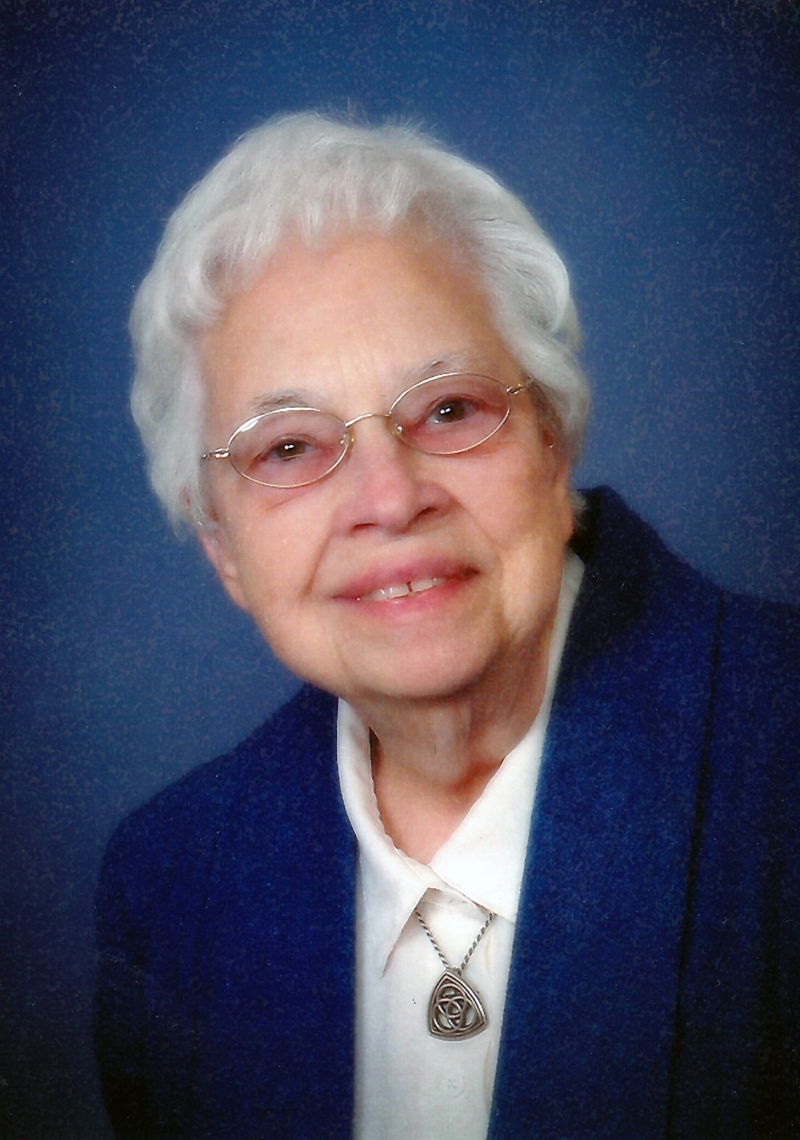 Funeral arrangements for †Sister Florita Rodman are as follows:
Viewing in the Chapel at Providence House in Kingston on Wednesday, November 12 from 2-5 p.m. and 6-8 p.m. with the Wake Service at 7:30 p.m.
Mass of Resurrection on Thursday, November 13 at 3:00 p.m.

We commend to your charity the soul of our beloved
Sister Florita Rodman
who departed this life on November 8, 2014
in the sixty-seventh year of her religious life
Age: 82 years, 0 months, 10 days
Resurrection Service: Thursday, November 13, 2014,
at 3:00 p.m., Providence House Chapel

Teresa was the oldest of seven children born to Anna (Judermanns), originally from Aachen, Germany, and George Rodman. Growing up in McKeesport, Pa., she was taught by the Sisters of Divine Providence in elementary school and at Providence Villa High School. In the summer of 1947, Teresa, with two other Villa students, traveled to Kingston, Mass., to be junior counselors at Camp Mishannock, a newly-opened ministry of the Sisters.

Teresa was given the name Sister Florita (little flower) and was prepared for a life of ministry, supported by prayer within a community consecrated to the God of Providence. Educated first as a primary teacher and later achieving a master’s degree in theological studies, Sister Florita continued to study throughout her life, receiving certificates in religious education, as a pastoral associate, and in pastoral administration. Sister Florita’s ministry expanded into religious education and pastoral ministry in parishes of the Archdiocese of Boston, in Ocean Bluff, Plymouth, and East Weymouth.

After first vows, Sister Florita taught in the Pittsburgh Diocese in Beaver Falls, Etna, and Sharpsburg. She was then missioned to New England to teach at Sacred Heart School in Kingston. Within a few more years, she was asked by the Community to assist with training postulants and to become vocation director for the new province. Sister Florita also served on the provincial council of the New England Province. In 1980, envisioning new ways of relationship within the Community, Sister Florita initiated the Associate program and was its director for the first 12 years.

Taught very early by her grandmother to sew, at age 10, Teresa began making her own clothes and some for her brothers as well. She quickly learned to make the Sisters’ habits and veils, and in her first years of teaching, spent every weekend at the motherhouse working on clothing for the postulants and novices. In Kingston, too, she taught all the newest members to sew, while also making uniforms for Sacred Heart students and Mishannock campers. Sewing gave her great pleasure, even to these last years, when she stitched dining room curtains for the Community and her flax seed wraps, which she sold at parish fairs.

Creator and director of CHRISM, many lay men and women were prepared for responsible roles in the Church through this training program of the Archdiocese of Boston. Sister Florita ministered in the South Region of the diocese in collaboration with Bishop Daniel Hart and Bishop John McCormack. She was elected director of the national USA East of the Faith and Light communities, an organization serving people with disabilities, and was part of the group that established the National Association of Lay Ministers (NALM). From 1999 until 2011, Sister Florita had the great joy of being resident pastoral minister at St. Helen’s Parish in Amory, Miss., where she developed a strong community and called forth the laity of that parish to lead its programs and its outreach to the poor. In the last few years, Sister Florita shared her presence with those with whom she lived and as a volunteer at St. Kateri Parish in West Plymouth.

Throughout her life, Sister Florita spoke often of God’s Providence. She wrote recently, “I trust in God’s Providence for our quick and peaceful entrance into the Kingdom.” We rejoice with her that she is with God!

Read Sister Florita Rodman's profile from the Meet Us section of our site, posted before her death.
If you would like to make a gift to the Sisters of Divine Providence in memory of Sister Florita visit our donation page.