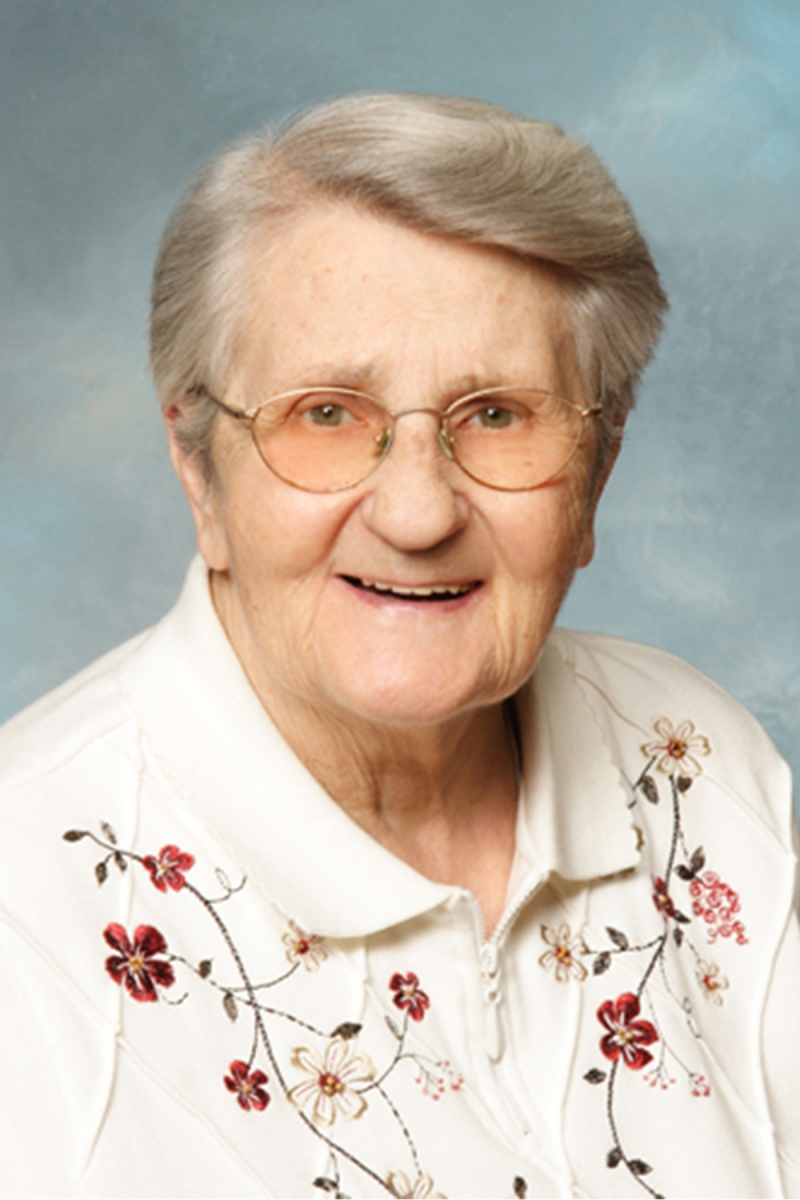 We commend to your charity the soul of our beloved
Sister Hilda Prohaska
who departed this life on June 9, 2017
in the sixtieth year of her religious life (January 19, 1958)
Age: 86 years, 11 months, 9 days

“The harvest is plentiful, but the laborers are few; therefore, ask the Lord of the harvest to send out laborers into His harvest.”   Luke 10: 10

Theresa Prohaska came to the Sisters of Divine Providence from Springdale, Pa, where she was born in 1930, the youngest of eight children. In a short autobiography which she wrote in elementary school, she describes her wonderful pre-school childhood as having “only to eat, sleep, and play” with her siblings and the other children in the neighborhood.  Theresa was afraid of dogs back then, so when she was six years old and it was time to begin school, she cried so hard because of the dogs that were always around school, that her mother agreed she could wait until the next year to begin first grade.  Luckily, by then, she was ready for school and even enjoyed it, especially because it gave her a chance to be involved in sports all through elementary and high school.  Theresa began to work in several local firms immediately after graduation.  She was also actively involved in St. Alphonsus Church and was the volunteer driver for the Sisters of Divine Providence who taught at the school there.  It was through her close association with them that Theresa realized her call to religious life and entered the community in 1958.

Despite being at least ten years older than the other postulants in her group, Teresa had more energy to do physical work in the Lord’s harvest than any of them.  From her early days in the novitiate, she cleaned, scrubbed, painted and mowed with the kind of energy and care that probably helped give our community the nickname, “Dutch Cleanser Ladies.”  She had a way of getting the other novices to be as generous with their time as she was with hers, recruiting their help for  the most difficult tasks, like re-painting the outdoor stations and mowing the grass in between the tombstones in the cemetery.

Theresa, who had chosen the name, Hilda, for her religious name in honor of her mother, made her first vows in 1960.   She then began to labor in the Lord’s harvest in a more direct way by beginning her ministry of teaching little children.  Sr. Hilda taught in at least nine elementary schools in Pennsylvania and one in Ohio.  Because she often worked with students in the second grade, she had the task of preparing them for their First Holy Communion, a task which she recognized as a privilege.
In 1970, her teaching ministry was temporarily interrupted when she was asked to labor in the Lord’s harvest in Rome at the home of Cardinal Wright. There she did whatever was necessary to make the Cardinal comfortable and his home presentable.  She received in return the unexpected treat of visiting the wonders of the Eternal City.

Whether teaching school or doing physical work, Sr. Hilda’s life was characterized by caring labor for others.   She would readily offer to help anyone in need, seeming to recognize that the harvest of the Lord is everywhere.  Perhaps she also tried to compensate for the laborers being few by doing the work of many.

Although never a person who spoke much about her own spirituality, Sr. Hilda had deep faith in God and special devotion to the Blessed Virgin.   Interestingly, as she grew older, she began to express to her good friend and travel partner, Sr. Natalie, how dependent she felt on the guidance of the Holy Spirit.   When they went on vacations together, Sr. Natalie would ask her if she knew how to get to their destination.  The reply she received was always the same: “No, but I will.”  Sr. Natalie wonders now if the Holy Spirit had become Sr. Hilda’s personal GPS, not just for driving, but for all her life!

May Sr. Hilda truly now rest in peace from her labor!

CLICK HERE to make a contribution in honor of Sister Hilda's memory.