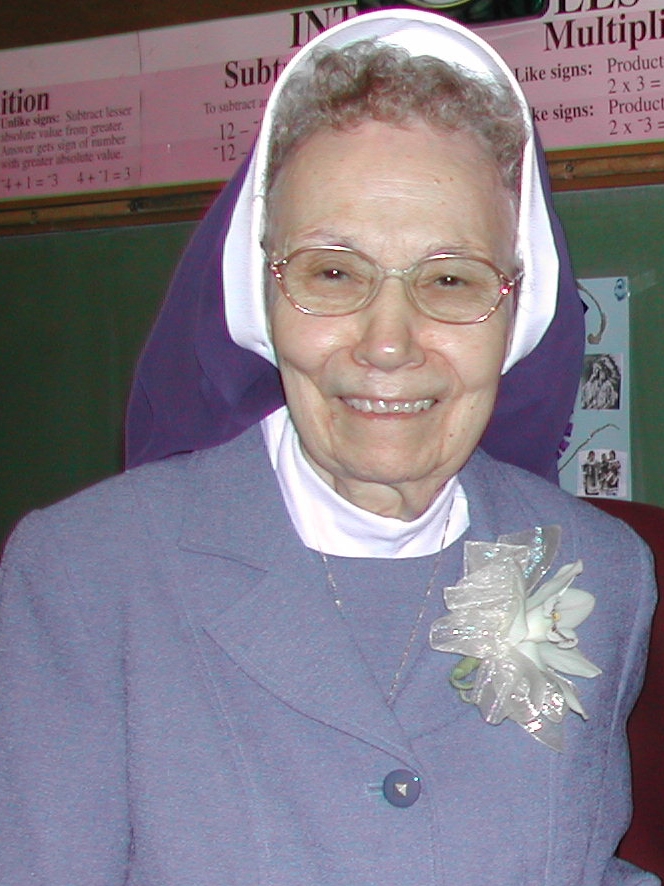 We commend to your charity the soul of our beloved
Sister John Francis Danko
who departed this life on September 1, 2017
In the seventy-third year of her religious life
Age: 90 years, 7 months, 2 days

In her own quiet way, Sister John Francis departed this life in absolute peace.  Because of her willingness to endure the challenges of her lymphoma diagnosis and extensive treatments ten years ago, we were blessed with more time to share in her beautiful life.

Dorothy Ruth Danko was one of three children born to Frances (Strasek) and John Danko in Swissvale, PA.  Both her sister Virginia, and her brother John, have predeceased her.  She leaves her sister-in-law and several devoted nieces, nephews and their spouses and families who treasured their visits with her over the years and in her latest illness.

Inspired by her mother’s love of her faith and the life of Sister Liguori, Sister John Francis responded in 1944 to God’s call to be a Sister of Divine Providence.  After her profession of vows, she taught at St. Norbert’s in Overbrook, later moving to New England, as one of the pioneer Sisters in the ministry of education at Sacred Heart School in Kingston, MA.  This ministry spanned 54 years and was marked by many special achievements.  Sister was a beloved teacher, “dorm mother” and administrator.  Serving as principal and later vice principal of Sacred Heart Junior High School, she once wrote that she “wanted to inspire her students to dream and to follow their dreams.”  Towards this end she began Youth Speaks, developing competitive speech teams and also initiated the Beta Club, now known as the National Junior Honor Society.  Her deep love for the school and commitment to its excellence and success was known by all.  A woman of wisdom, always open to change, Sister John Francis was one of the first at the school who eagerly learned to use a computer.

For more than fifty summers, Camp Mishannock, named for Mary, our Morning Star, was home to Sister John Francis.  Her dorm was a haven for countless girls who flourished under her gentle care.  Welcoming campers from Mexico and other countries, Sr. John Francis was ahead of many of us in experiencing the gift of internationality.

As a Sister in Community, Sister John Francis added a calm presence wherever she was.  She had an avid interest in all those around her and prayed fervently for the many needs of her family, friends and the world.  Her life was a faithful revelation of God’s loving Providence for anyone who met her.  When introduced to the Hospice staff, Sister was delighted to recognize the Social Worker as a former student, who fondly remembered her as well. Sister’s warm smile “so strong and bright” gave witness to how much she still loved Sacred Heart and all who crossed her path there.  May her loving and gentle spirit live on in all of us.