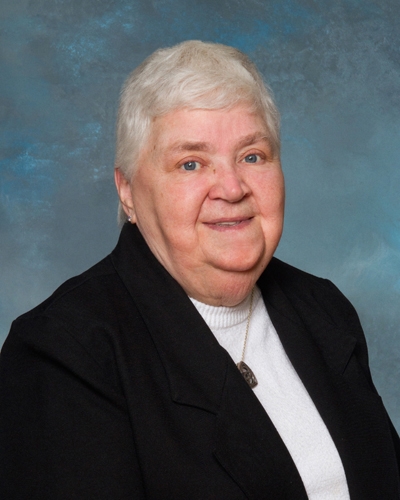 We commend to your charity the soul of our beloved
Sister Lois Ann Wuenstel
Who departed this life on October 29, 2018
In the sixty-sixth year of her religious life
Age: 85 years, 13 days

Julia was born to Mary Ann and Louis Wuenstel the second youngest of 9 children.  She was baptized at St Martin's Church in the West End, and educated at St. Martin’s. Julia entered the Community of Divine Providence in 1952 receiving the name of Sister Lois Ann in honor of her Mother and Father. She received her higher education at Duquesne University and the University of Detroit. She became a certified teacher for the Pittsburgh Diocese as a Business Teacher of Typing, Shorthand and Bookkeeping. Many were amazed at the speed of her typing skills.

Her greatest gift and joy was the acceptance of the assignment to Sto Rox Plaza, an independent living facility located in her beloved McKees Rocks. Since September 1989 when the facility opened Sister Lois Ann had been the manager. As she tells her story, she chuckles, "Nothing prepared me for this ministry. The first night I was there, the fire alarm went off. The first day, the elevator broke. People were moving in at all hours. It was a nightmare! I was comforted by the elderly and have loved them dearly for helping me get through the beginnings."

For her management efforts, Sister Lois Ann received the highest ratings from HUD for the yearly inspections of her record-keeping relating to rent and finances but most of all her care for the elderly living there. With her business education and secretarial skills she was able to accomplish her daily tasks with much ease and care.

At the time of her Jubilee Year she spoke about her religious life as a dedication and service to the elderly and their needs. Her favorite Scripture was the Beatitudes and she was known to be called "Beatitude Woman" by the elderly. She was also described as prayerful, dedicated and energetic. The ministry at Sto Rox brought much peace and purpose to her life.

For the last 5 years Sister Lois Ann suffered with a breathing issue which set her back from fully ministering at Sto Rox. The oxygen machine was difficult to handle and didn't function well for her. During her last directed retreat she became more aware of her trust in God and she found new courage and acceptance of what God was asking her to do. She did not lose heart for she now knew that no matter what might be happening, no matter how painful it might be "It was God who sustains me" was her mantra from now on.

Two years ago Sister Lois Ann gave up her love and ministry at Sto Rox to retire at Providence Heights, bringing with her the cumbersome oxygen machine to help her breathe. She struggled with retirement and perhaps this struggle brought about her death in the autumn of her life. She was born in autumn amid the beauty of glorious color and dancing leaves. Now she knows, autumn is proof that both birth and death are beautiful as she dances (without her oxygen machine) in the wonderful presence of all the elderly she helped and loved to the end, into the Presence of our Provident God, forever.

CLICK HERE to make a contribution in honor of Sister Lois Ann's memory.