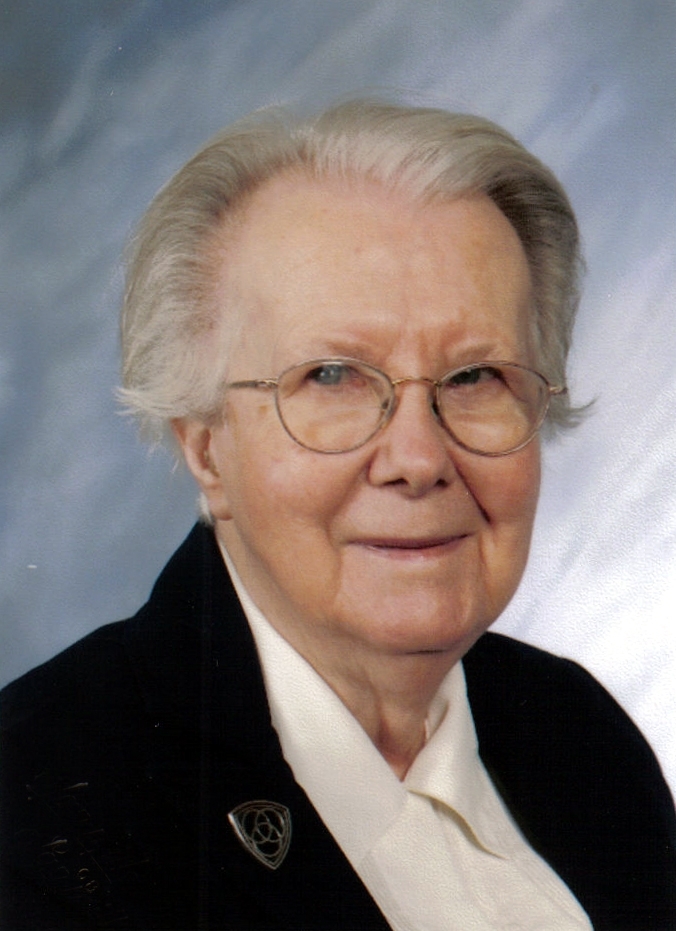 We commend to your charity the soul of our beloved
Sister Lucy Schmidt
who departed this life on February 1, 2016
in the seventy-eighth year of her religious life
Age:  93 years, 4 months, 23 days

You have been told…what the Lord requires of you:  only to do right, to love goodness and to walk humbly with your God.  [Micah 6:8]

One of six children born to Michael and Ann (Vogel) Schmidt, Bernadine entered the community of the Sisters of Divine Providence just before her 16th birthday.  She felt drawn to the witness of the Sisters, especially Sister Mary Philip Hampton, who taught her at St. Mary’s in Brussels, IL.  She wanted to share life as one of the Sisters.

Sister Lucy earned a BS in English and History and an MA in Theology.  An educator most of her life, she taught in Madison, IL and, in Missouri, in Normandy, Bonnots Mill, Tipton, Imperial, Wardsville, Jennings, and Lemay.  She also served as Director of Religious Education in Florissant, MO, as an activities coordinator and as a senior services coordinator.  Sister Lucy was a woman of intelligence, who wanted to develop her potential gifts to serve others’ needs.  An avid student, she attended workshops in religious education and liturgical music, as well as several Elder Hostel programs.  She earned a certificate in gerontology which prepared her to direct programs to support elderly women and men.  The City of St. Louis honored her as an “older worker” proclaiming, “She endeavors to set up neighborhood network volunteer services that help the frail elderly at home; to promote skill banks as a means of assisting the elderly; and to motivate older people to appreciate their own potential.”

During her many years within community, Sister Lucy offered her gifts in leadership, serving as provincial superior, as a delegate to the 1980 General Chapter which revised our Constitutions, and on many committees, one of which was to deepen our understanding of our charism of trust and openness to the Providence of God.  Sister Lucy also served for a number of years on the Board of Trustees of St. Elizabeth’s Medical Center.  In her later years, she gathered community memories, working diligently to move, collect, organize, preserve and catalog important documents and significant items for the community archives.

Sister Lucy’s spiritual journey led her to an ever-deeper commitment and love in her relationship with God and to allow God’s call to bring about the reign of God in her service to others.  She became an activist and fought for a number of social justice causes, such as budget cuts that unduly affected the poor.  In 2005, at age 83, Sister Lucy travelled to Springfield IL to participate in a death penalty rally at the capitol building.  She wrote many letters to legislators, to newspapers, and to governors seeking to express Gospel values and to influence their decisions, especially in terms of ending the death penalty in the United States.

Sister Lucy prayed daily for many people and needs.  She often signed her letters with the following blessing.  “May the Lord bless you and keep you.  May He let His face shine upon you and be gracious to you.  May He give you (us, the world) peace!”  As she meets Jesus she will be easily recognized for a life of responding to the Scriptural mandate heard in Micah, …doing right, loving goodness, and walking humbly with her God.