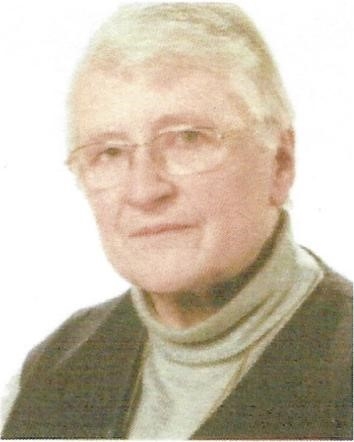 On Thursday, 15th of July 2020 the Lord of life and death called into His glory during the early morning hours our Sister Maria Ingeborg Müllenbach.

She had waited with great longing almost 10 days between sleep and a few moments of being woken up for this moment.  Weeks before, she had already said goodbye step by step. We could all sense that she thought her life was complete.

On February 7, 1934 Sister Ingeborg, as Barbara Müllenbach, was born in Trier. She had a long, eventful and very fulfilled life.  Even before she joined our Congregation, on February 7, 1955, she completed her training in our Kindergarten Teacher Training Seminar in Oberursel.

After making her first profession, on May 13, 1958, she was sent to the Gernsheim community. From 1962 to 1967 she taught in the Seminar Kindergarten in Oberursel.  On the 1st of May 1963 she made perpetual profession in Mainz.  Afterwards she was assigned for two years to Obererlenbach.

On August 22, 1969 she followed the call to our mission in Peru.  There she ran a children's home and was able to witness the development of our congregation in Abancay.  After acquiring a good knowledge of the Spanish language and developing many relationships, her ministry with the poor children was ended in 1982 by a serious illness.  She had to say goodbye to Peru, return to Germany and undergo surgery.  Her state of health did not allow her to return to the place where she had worked for many years.  She maintained many contacts with people from there until the last weeks of her life.

After her recovery, Sr. Ingeborg was assigned to the house and entrance area in Oberursel.  In November 1985 she was sent to Ockstadt, where she took over services in the convent and the parish.  When the local convent had to be closed, she was ready to go to Bad Nauheim to our old people's home and dedicate herself to work with the elderly people.

When this house also had to be closed in 1993, she returned to Oberursel, trained for pastoral care in hospitals and worked for five years in the Northwest Hospital, Frankfurt.  After another period of illness and rehabilitation she had gathered enough courage and strength to be sent again. With great readiness she accepted the invitation to Olesno, Poland in 2008. Together with two sisters, she built up a convent there, acquired basic knowledge of the Polish language and supported teachers in school.  Unfortunately this local house of our community had to be closed after four years.

On July 4, 2012 Sr. Ingeborg came to the convent in Aschaffenburg, where she could spend her time of retirement.  Eight years were still given to her until she herself recognized that she could no longer cope well alone and was ready to accept help.

Sr. Ingeborg had many connections with people in all the places where she worked.  We could say that she had an international heart.  Now we can trust that she will be an intercessor with the Lord for all of us.

May God give her his peace and eternal joy.