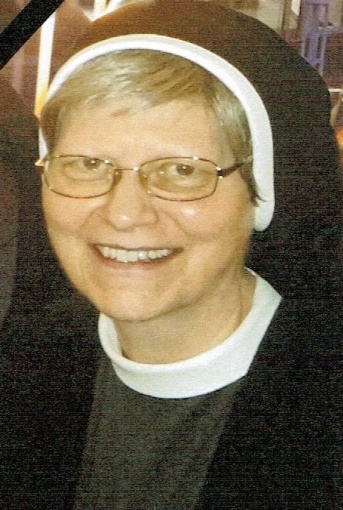 We praise, O Lord, Your providence
and we entrust ourselves...
to your loving concern.

Sister Maria-Regina Ewald returned home to the Lord in the evening hours of April 21, at 8:15 p.m., after serious illness, in the Catholic Clinic, Mainz, under the loving attention of the palliative care unit.  She is freed from all pain and has a new life.  Sister Hildegard, her own sister and I, could accompany her until her last breath.

Sister Maria-Regina was born as the fifth child of six siblings on May 6, 1954 in Mosbach, Odenwald, in a family which was strongly influenced by their Catholic faith.  After graduating from elementary school, she chose to train as a pediatric nurse, underwent several internships, and then applied for training as an educator, which she completed in 1982.  In the same year she joined our congregation to become a "Sister of Divine Providence". She made her temporary vows in 1985 and perpetual vows in 1990. She received her mandate for pedagogical work with children in various institutions of our Congregation.

In 1998 she felt the call to the contemplative life in a Franciscan community and transferred to the "Poor Sisters of St. Clare" in the convent of Bad Neuenahr.  In 2003 she made her solemn profession for life.  In the same year she was elected by the community of sisters to the position of Discreet and thus deputy to the abbess.  She carried out this service until 2018.  During this time she worked at the entrance of the monastery and designed candles, the sale of which contributed to the monastery's livelihood.  She lived a total of 20 years in simplicity, friendliness and constant serenity in this community.

In 2000 she was diagnosed with cancer. After an operation followed by chemo and radiation, she regained her courage and worked for the interests of the convent.  In 2017 the disease came back and she had to undergo surgery again.  After a reasonable recovery, she continued to perform her duties in the monastic community in all simplicity and confidence.  Nothing was too much for her, but she was concerned about the future of the convent, which was undergoing major changes at that time.  In 2018 she had to undergo further radiotherapy.  The diagnosis was very worrying, as other organs were affected.  But she seemed very calm and brave.  She hoped for further treatment, the skill of the doctors and the help of God.

For health reasons, the abbess allowed her to spend a holiday with us in Finthen in 2018, where her sister, Sister Hildegard, also lives.  In conversations it became clear to us that Sister Maria-Regina needed more than just medical treatment.  We invited her to come back to our congregation, even though we knew how seriously ill she was, in fact, precisely because of this.  She had not thought this possible and gladly accepted the invitation.  The necessary formalities were soon completed.  On April 8, 2018, in a simple liturgical celebration, in the presence of the sisters, she was reinstated as a member with all rights and duties in our Congregation, in which she had already lived from 1982 to 1998.

Sister Maria-Regina became a patient at the University Hospital Mainz and underwent various cancer treatments.  When there was no prospect of recovery, she began to prepare for an early end to her life.  She did this with all her determination and trust in God's love and mercy.  Within the convent she worked hard, to which her few strengths were still sufficient, and gave an admirable example in accepting her illness and in her contact with the sisters.  What particularly distinguished her was her faithfulness and sincerity.

Since because of the pandemic only five people can attend the funeral at the cemetery, the coffin with the bodily remains was placed in the convent chapel for two hours prior to the transfer to the cemetery.  Thus, all sisters had the opportunity to say goodbye to Sister Maria-Regina in peace.  We will invite the relatives of Sister Maria-Regina to a memorial service, a visit to the grave and a get-together with Sister Hildegard after the end of the corona crisis. This is what the deceased had discussed with her siblings during their last visit.

We will miss Sister Maria-Regina very much and remember with gratitude her short period of life with us and among us.