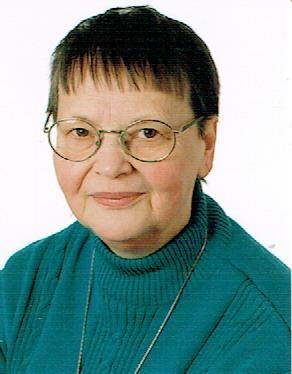 All of us were very surprised and taken aback by the sudden death of Sister Ulrika.  From the midst of the life of the community and every day life, she went quietly and discreetly from us in the same way as she had lived.  The evening before her death she had been cheerfully among her fellow sisters at a small celebration.  Since the following morning she did not come to the Eucharistic celebration as usual, the sisters were very worried.  They found her dead in her room. She probably did not envisage herself that the Lord would take her home at this point in time. Only a few days before, she had celebrated the day of her profession of vows.

Sister Maria Ulrika, born Margot Fettel, was born in Bürstadt/Hessen on 14th December 1936. At the age of 24, she entered our community as a trained children’s nurse on 25th March 1960. On 08th September 1963 she professed her first vows and on 12th September 1968, her final vows.

From 1963 to 1965 she completed her training as a kindergarten teacher.  Soon after she took over a new group of children in our newly-erected children’s home in Oberursel/Taunus and was in charge of it until 1969.  From 1969 until 1979 she was in charge of the kindergarten in Obererlenbach.

In 1979, this local community was closed and Sister Ulrika returned to Oberursel and served as a receptionist in our technical college where she maintained good contact with the students.

From 1989 until 1992 she was entrusted with serving as superior in the convent of the provincial house.  After that she was allowed a course for ongoing formation in Rome at the Institute „Regina Mundi“.  After her return she was sent to the Westerwald in our retirement home in Möllingen.  There in collaboration with the other sisters, she committed herself to the wellbeing of the residents.  The closing of that institution was the reason that her new workplace was the retirement home in Bad Nauheim where she stayed from 1995 to 2003.

Although Sister Ulrika could have gone into retirement she was willing to go to Poland together with two sisters where the community opened a new house in 2004.  For eight years, Sister Ulrika worked in Olesno/Poland teaching pre-school children German.  When this house had to be closed because of the age and health restrictions of the sisters, Sister Ulrika moved to Mainz to the former Motherhouse, in order to take on part-time service as a receptionist. Sister Ulrika was a modest and adorable fellow sister.  We thank her for her loyal cooperation in our community.