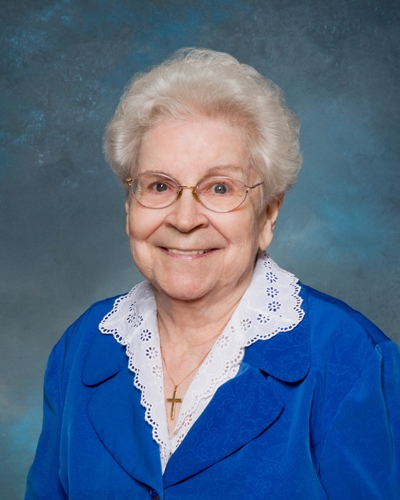 “But the wise shall shine brightly like the splendor of the firmament, and those who lead the many to justice shall be like the stars forever.” (Daniel 12:2)

A book titled, As Stars for All Eternity, was published in the 1960s. The title is taken from the Book of Daniel, and the book was written in praise of teachers. Sister Marie Luraghi certainly was a star as educator.

Sister Marie (Margaret) Luraghi was born in Beaver Falls; her parents were Philip and Marie Luraghi. She was the sixth of ten siblings: John, Ellsworth, Florence, Marie, Laura, Ruth, Norma Jean, James and Kaye. She is survived by her brother James. She was especially close to her youngest sister. Kaye struggled with health problems, and Marie really looked out for her.

Sister Marie was well prepared for the ministry of education. She had degrees and certificates from Duquesne University, Cardinal Stritch College in Milwaukee and the University of Dayton, Ohio, including Bachelor of Education and Master of Arts degrees. She had a knack for teaching.

She was a primary teacher, principal, educational consultant in the Pittsburgh, Detroit and Youngstown Dioceses, and also ministered to the elderly in parishes in Beaver County.

Sister Marie was a woman of many gifts. Foremost among them was her gift for teaching young children. She was an excellent primary teacher, meticulous and dedicated to her students. Sr. Marlene Luffy remembers that she never raised her voice and she taught calmly even when correcting the students.

When St. Anne School in Castle Shannon was chosen as one of the pilot schools for the non-graded system, Sister Marie was one of four sisters of Divine Providence who received the necessary training and orientation for the new system.  She was also one of the pioneers to initiate a new mathematics program in the primary grades of the new non-graded system.

Sister Marie was also a pioneer in the beginnings of some schools staffed by the Sisters of Divine Providence. One of these, in the early 1950’s, was in Michigan, Our Lady Queen of Peace. Later, in 1959 she and three other sisters began St. Bonaventure School in Glenshaw.

She also was a fun-loving person, which served the sisters in Michigan, as well as herself, very well. Those early sisters did not come back to Pittsburgh during the school year, so making fun was very important to their well-being.

Sister Marie was a most excellent cook and baker. Many people enjoyed the fruits of her hands in that regard and she would surprise people every now and then with another new and miraculous and tasty creation.

She also was a lover of things beautiful and, after shopping for bargains, she would wrap gifts, especially for Christmas. She was very creative in making bows for gifts and usually was in charge of wrapping benefactors’ gifts for Christmas, because she could make him look so beautiful.

If you would like to make a gift to the Sisters of Divine Providence in memory of Sister Marie visit our donation page.