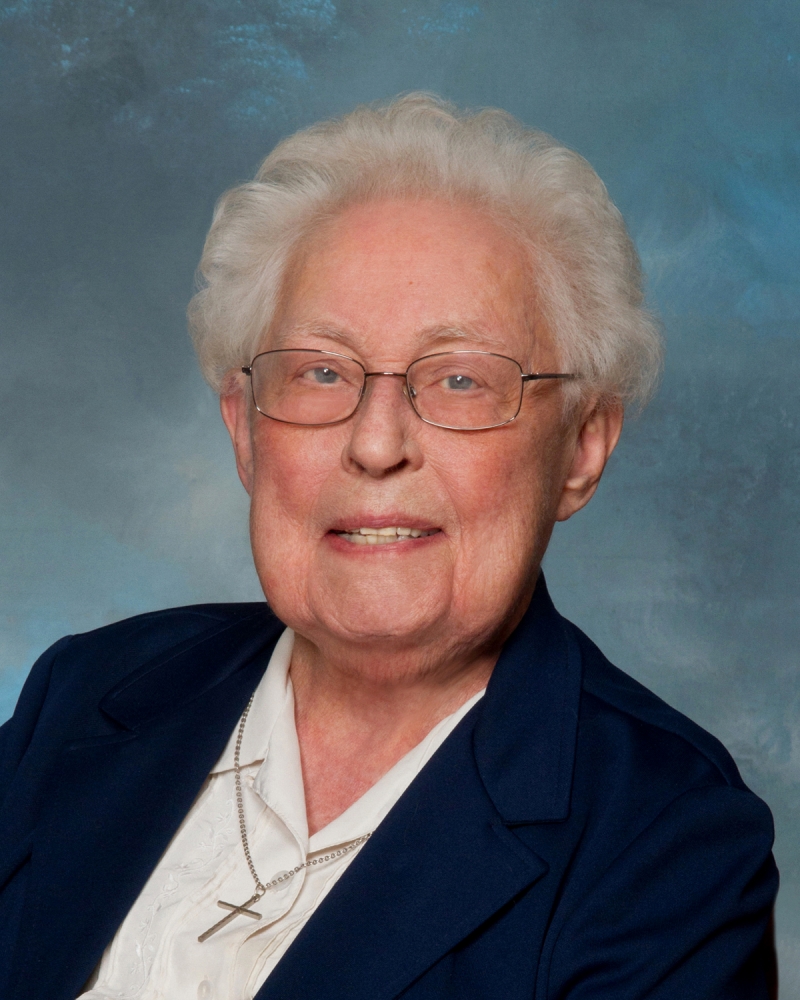 We commend to your charity the soul of our beloved

who departed this life on April 14, 2012, in the seventy-fourth year of her religious life.

Last year, the Pittsburgh Symphony Orchestra gave a Music for the Spirit concert at St. Paul’s Cathedral in Pittsburgh. The Bishop welcomed everyone, and stated, “Listening to this music is praying.”

During her lifetime, Sister Mary Alvin gave many people the opportunity to pray by providing them with music. Mary Hunter was born in Wheeling, West Virginia, and grew up in the neighborhood of her parish, St. Alphonsus. Daughter of John Hunter and Mary Bernhart Hunter, sister of Ralph Hunter and Alvin Hunter, cousin of Sister Theresa Bernhart, friend and colleague of Sister Genevieve Brandstetter. She was well prepared for a life in music, with a Bachelor of Science in Public School Music degree, and a Master of Science in Music Education degree, both from Duquesne University. Sister Mary Alvin was certificated from the Commonwealth of Pennsylvania to teach and supervise music in any public school. She influenced the lives of thousands of students all over Western Pennsylvania.

When it came to music, and bringing music to many people, Sister Mary Alvin was undaunted. No matter what the challenge, she rose to the occasion. When the band at St. Mary’s High School in Sharpsburg needed new uniforms, she organized a candy sale, World’s Finest Chocolates, so that they could raise the money to get brand-new uniforms in their school colors; they proudly wore their new green uniforms in the St. Patrick’s Day parade. In 1962, she and Sister Genevieve approached the provincial superior and pressed their case for having the Sisters make a record; the record was Convent Choirs of America. Between rehearsals and actual recording, Sister Mary Alvin attended a lecture given by Alexander Peloquin, a noted composer of liturgical music, and asked him if he would come to one of the rehearsals and give some pointers. He did. This first record was followed two years later by a Christmas record, and two years after that by concerts for the benefit of La Roche College. During celebration of the Sisters of Divine Providence centennial year in America, Sisters Mary Alvin and Genevieve formed a Centennial Chorus. The Chorus gave many performances, once again bringing music to many people.

Sister Mary Alvin taught scores of piano students. Her students performed in many competitions, including some competitions that she hosted. She was the chorus teacher at Marycrest, initiating many future members of the community into making beautiful music.

When the time came for Sister Mary Alvin to “retire” from giving piano lessons to young people, she offered to give piano lessons to any of the Sisters who wished to learn to play. All her life she taught singing and encouraged students and members of the Community to use the perfect instruments, their voices, to make beautiful sound. If Saint Augustine was correct in saying, “Who sings well prays twice," then Sister Mary Alvin’s gift to us is a legacy of prayer.

Most certainly Sister Mary Alvin is now thanking God always, with melody in her heart and on her lips. Could it be that she has already organized chorus and orchestra to praise God for all eternity?

If you would like to make a gift to the Sisters of Divine Providence in memory of Sister Mary Alvin, visit our donation page.