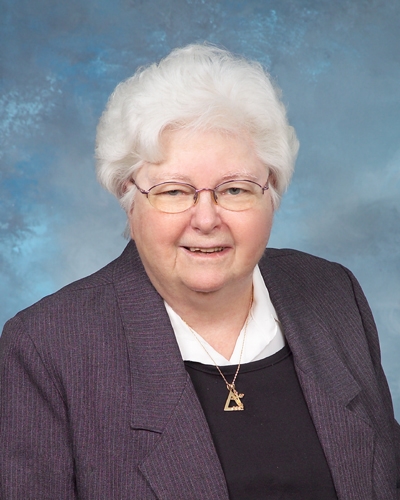 We commend to your charity the soul of our beloved
Sister Muriel Young
who departed this life on January 27, 2016
in the seventy-sixth year of her religious life
Age: 91 years, 7 months, 8 days

Sister Muriel Young had been struggling with her physical condition over the past several years and has gradually grown weaker. After all the celebrations of her Diamond Jubilee were over, she quietly gave herself over to preparing for the next and last transition of her life. One of the tributes she received on the occasion of her 75th Anniversary likened her to the prophetess Anna, who even though advanced in years, continued her faithful service in the temple. The faith of Anna was rewarded with recognition of the Christ Child; Sister Muriel’s faithfulness was rewarded by all those who recognized her outstanding contribution to Catholic education over many years.  How fitting it is for Sr. Muriel to pass into eternal life during this season when we celebrate the prophetess who recognized the incomprehensible light of God.

Dorothy Margaret Young was the second of four daughters born to Mary Kappler and John Young. She grew up in Sacred Heart Parish and lived a short distance from the convent where she got to know the Sisters. She entered the Community on September 8, 1940. Her mother thought she was a little young; she wanted her daughter to see more of the world. Dorothy knew she was ready. She completed her high school classes at the Motherhouse. Her younger sister, Bernadette, followed her to the convent six years later.

Over the years, Sr. Muriel received a B.E. degree from Duquesne University and a M.A. from Catholic University of America. From 1943 through 1960, Sr. Muriel taught primary grades in many schools in the Pittsburgh and Detroit Dioceses. From 1960-63, Sr. Muriel was assigned to be an Assistant Supervisor for the schools staffed by the Community. She then served as principal for 13 years, first at St. Anne School in Castle Shannon then at St. Basil School in Carrick. At St. Anne’s, she initiated, organized and supervised a non-graded program for 1600 students. At St. Basil’s, Sr. Muriel innovated and supervised a special communications program for teachers to improve student performance. She also introduced an elective program for upper elementary students to expand curricula for special interest students. Recognizing her talent as an educator, the Community appointed her as educational liaison between the Diocesan Schools Office and the Sisters of Divine Providence. During the years she was ministering in this way, the Diocese hired her as an Educational Consultant and finally Assistant Superintendent of Elementary Schools for the Diocese of Pittsburgh.  Among her other accomplishments she presented countless workshops in catechetics, curricular areas and staff development. She served as Vision and Values Director for the Diocese, a program designed by National Catholic Education Association to preserve and strengthen the identity of Catholic Schools.  Sr. Muriel also published several articles including a 54 page article picked up by NCEA in 1986 entitled “New Wine in New Wine Skins: A Challenge to Administrators.”  At the same time she also had written for Laidlaw, Merrill and Macmillan Book Companies on the correlation of vision and values to specific subject areas. Over the years she received numerous awards, certificates and citations acknowledging her contributions to education.

Not only was Sr. Muriel passionate about catholic schools and the education of children, but she was also passionate about religious life and the Community. When she served as the Community contact with the Pittsburgh Catholic, she wrote to the members about the importance of the visibility of the Community. “Every outward, visible sign and symbol that says ‘We care’ is important to the building of the Kingdom of God.”  We rejoice with Muriel for her faithfulness to all she held sacred. May she continue to be with us in “new” ways as we respond to God who calls us from the future.