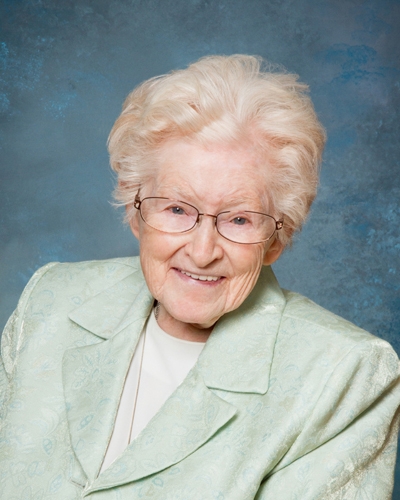 We commend to your charity the soul of our beloved
Sister Rosalia Caulfield
Who departed this life on December 23, 2017
In the seventy-ninth year of her religious life
Age: 97 years, 3 months, 28 days

Sister Rosalia (Cecilia Catherine) was the 5th child of Cecilia and Michael and grew up in the Sheridan area of Pittsburgh. Although triplets were born after her, they did not survive, making Cecilia Catherine the youngest of the very Irish family. Sister Rosalia had many happy memories of her childhood and adored her Irish immigrant Dad. She frequently related stories of doing things with her Dad that were quite special to her. She was the last survivor of her siblings and remained very close to other family members.

Rosie, as her friends called her, was frequently seen driving her electric wheelchair around Providence Heights, and always recognizable by her sign, “Lord, help me to be the person my dog thinks I am” on the back of it. She has long been an animal lover and enthusiastically greeted the visiting dogs with special treats.

Rosie’s sunny disposition and friendly manner endeared her to many people in the various places that she ministered. Although mostly known for her nursing ministry, Rosie originally started out as a first grade teacher. Her life changed when she was asked to take on nursing as her ministry. After completing her initial training at St. John’s Hospital on Pittsburgh’s North Side, she went on to study at Duquesne University and The Catholic University of America in Washington, D.C., where she earned a master’s degree in nursing. She worked in various capacities at St. John’s, Divine Providence and Braddock General Hospitals in Pittsburgh. Her ministry also included six years of teaching nursing at the Catholic University in Puerto Rico and several years of teaching in the nursing program at Penn State University. While in California visiting with her friend Father Charles Yost, she found out the Brothers of St. John of the Cross were looking for a pastoral minister at their hospital. She was introduced to them and they hired her on the spot. So at the age of 64, she picked up and moved to San Bernardino, California, to minister at St. Mary Hospital for nine years.

Over the years Rosie became a strong opponent of capital punishment and began corresponding with several men on death row and even visiting with them. While living at Providence Heights she initially coordinated the monthly sandwich-making for the homeless served by Operation Safety Net. She also had a special relationship with some of the Alpha School children and said that “they continue to bring joy, happiness and energy to her life.” Always proud to celebrate her Irish heritage and “the wearing of the green,” Rosie looked forward to the annual Pittsburgh St. Patrick’s Day Parade.

Despite her daily discomfort from extensive arthritis, Rosie could frequently be heard saying to a passer-by “come and sit down here awhile” and inquiring about that person’s day and how they felt. Whenever she was asked how she was doing, her normal reply was “just marvelous!” In describing her life at the time of her 75th Jubilee she wrote, “Over the past 75 years as a sister of Divine Providence, I have learned that a Provident God is my constant companion, and that His grace has empowered me to reach out to others in my ministries. It is my hope that I would be able to lead others to experience a profound trust in a loving personal God.”

May she rejoice now in the Lord who has been her “constant companion.”

CLICK HERE to make a contribution in honor of Sister Rosalia Caulfield's memory.