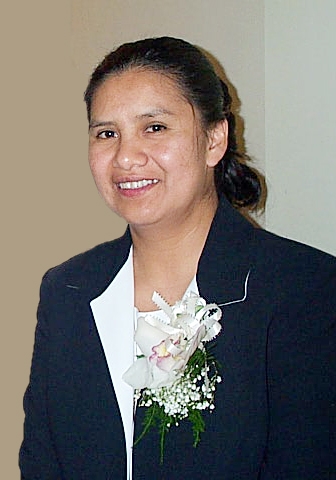 We commend to your charity the soul of our beloved
Sister Tania Santander Atauchi
who departed this life on September 26, 2019
in the twenty-seventh year of her religious life
Age: 47 years, 11 months, 20 days

"It is our greatest task to be like Jesus in everything.” —Bishop Wilhelm Emmanuel von Ketteler

Tania Santander Atauchi was born on October 7, 1971, in Urubamba, Cusco, Peru. She was the oldest child of Maximo Santander Rojas (deceased) and Nieves Atauchi Peña. Her sister, Nora Sonia, was born three years later and now has two daughters of her own, Danna (13) and Sami (11), who were shining stars in Sister Tania’s life.

Most of Sister Tania’s early education was in schools in Cusco, where she earned a degree in English. In April 1991, she was “Drawn by the love of Jesus Christ,” (from the vow formula that Sister Tania would later profess) and entered the Sisters of Divine Providence in Abancay, Peru. Once her years of formation were completed, she was engaged in a variety of ministries, including providing food assistance to needy families; helping mothers who were driven from their homes during the Shining Path conflict; and serving as the director of a home for young women studying at a distance from their families. Sister Tania sought help for these women in a variety of ways, including speaking directly to the president of Peru when he visited the area and telling him the students needed beds, bedding and typewriters. He asked her to put her request in writing and two months later the items arrived. Along with her ministry, Sister Tania continued her studies and earned a degree in religion and philosophy.

In 2000, Sister Tania made the decision to join the Sisters in the United States. She arrived in Kingston, Massachusetts, in July and quickly moved into programs in the formation house to help her understand the culture and the practices of religious life in her new surroundings. She soon earned a Master of Arts Degree in Romance Languages, which equipped her for teaching Spanish at Stonehill College in Easton, Massachusetts. At the college, she met and taught with Father Richard Gribble, CSC, who became her mentor. Sister Tania was a gifted language teacher, but she was once again drawn by the love of Jesus Christ and sought a ministry where the teaching of Jesus was central. She found this as the Director of Religious Education at the Cathedral of the Holy Cross Parish in Boston and then at St. Paul’s Parish in Hingham, Massachusetts. While engaged in these ministries, she earned a Master in Theological Studies from Boston College.

The same persevering spirit that Sister Tania evidenced in Peru was clearly visible when she received a dire health prognosis and courageously went through treatments these past six and a half months. With Sister Gladys Segovia León’s loving support, Sister Tania faced each new medical challenge. About a month ago, she even tried to resume teaching at Stonehill College and endeavored to help St. Paul’s prepare for a new school year. Sister Tania truly understood the words of our Founder Bishop Ketteler that “It is our greatest task to be like Jesus in everything.”

CLICK HERE to make a contribution in honor of Sister Tania's memory.