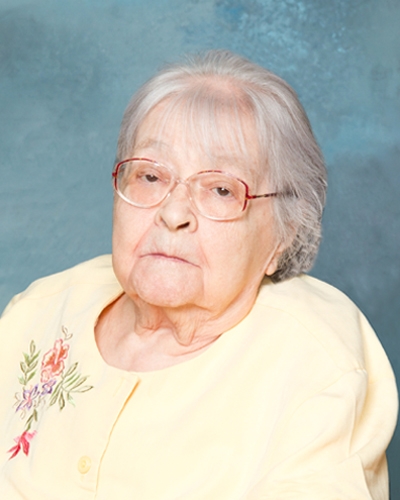 We commend to your charity the soul of our beloved
Sister Victorine Verosky
who departed this life on June 15, 2014
in the eighty-fifth year of her religious life
Age: 100 years, 10 months, 23 days
Resurrection Service: Wednesday, June 18, 2014 at 4:00 p.m.

“The grace of the Lord Jesus Christ and the love of God and the fellowship of the Holy Spirit be with all of you.” (from the letter to the Corinthians for June 15, 2014, The Feast of the Holy Trinity and Divine Providence)

Sister Victorine Verosky passed quietly into eternity on Sunday, June 15 as the Community celebrated the feast day of Divine Providence, the name we call our Triune God. Sister Victorine lived a full life, having joined the ranks of Centenarians, on July 22, 2013. She showed signs of decline on Saturday morning and remained peaceful during the hours she waited to be united with the God she served so faithfully during her long life. Madeline Verosky, daughter of Agnes D’Zmura and Michael Verosky, grew up in St. Joseph Parish in Braddock, PA She attended Divine Providence Academy and in her own writings, cites the teachers at Divine Providence Academy as being the most influential factor in her decision to enter religious life. She entered the Congregation after graduating from the Academy in 1929.

Her life of scholarship in languages and literature was nurtured in the Community as she pursued a master’s degree in secondary education from Duquesne University, a master’s degree in theology from Providence College, RI and a Ph.D. in literature from Fordham. Following her master’s education, Sister Victorine taught at Catholic high schools in Pennsylvania and Ohio for 26 years. When La Roche College received its charter in 1963, Sister Victorine was named its first Academic Dean. Here she also taught courses in English literature and theology. This ministry, which lasted for two years, was followed by an invitation from the General Superior to begin a training program for young women interested in joining the Congregation in its new South Korean foundation. During this time she was also a member of Sogang University, the Jesuit University in Seoul. She remained in Korea as the founding regional Superior for 21 years. While serving in South Korea, she became an expert in the Korean language as well as in the literature of Asia. A testimony to her effectiveness is the young, dynamic St. Joseph Province in South Korea which now numbers 130 Sisters of Divine Providence.

From Asia, Sister Victorine, at age 75, traveled to Haiti, where she assumed the position of Academic Dean at the American University of Les Cayes. She joined with members of other religious Communities in a project to combat illiteracy in the county which at that time was estimated to be 90 percent. For this one year commitment, she said “I will be teaching wherever I am needed.” Following the year in Haiti, Sister Victorine went to New York. She was engaged in parish ministry at St. Rose of Lima Parish in New York City for six years. Finally, in 1995 she began her final active ministry which was at Jeremiah’s Field in the Spanish Harlem section of New York City. The mission of this program was to provide transitional housing to single homeless women in recovery from substance abuse. In a letter received by the Congregation about Sister Victorine’s service in this last ministry, it was stated that “She was able to encourage and sustain the women compassionately and firmly. She was responsible for creating a direction and atmosphere for living in shared space.” As she finished this ministry, she reflected back on all her years of service and said that she tried to live out of the ideals of Bishop Ketteler.

Sister Victorine was named La Roche College’s Woman of Providence in 1998. La Roche College’s English Department also named an award for scholarship in English in her honor. Sister Victorine has been teacher, missionary, and servant leader throughout her active life in Community. Her inspiration has come from her deep faith in a provident God, whose wisdom and love for humanity she exemplified so well. She now rests in the embrace of her Triune God whose name is Providence.

If you would like to make a gift to the Sisters of Divine Providence in memory of Sister Victorine visit our donation page.

Read Sister Victorine Verosky's profile from the Meet Us section of our site, posted before her death.