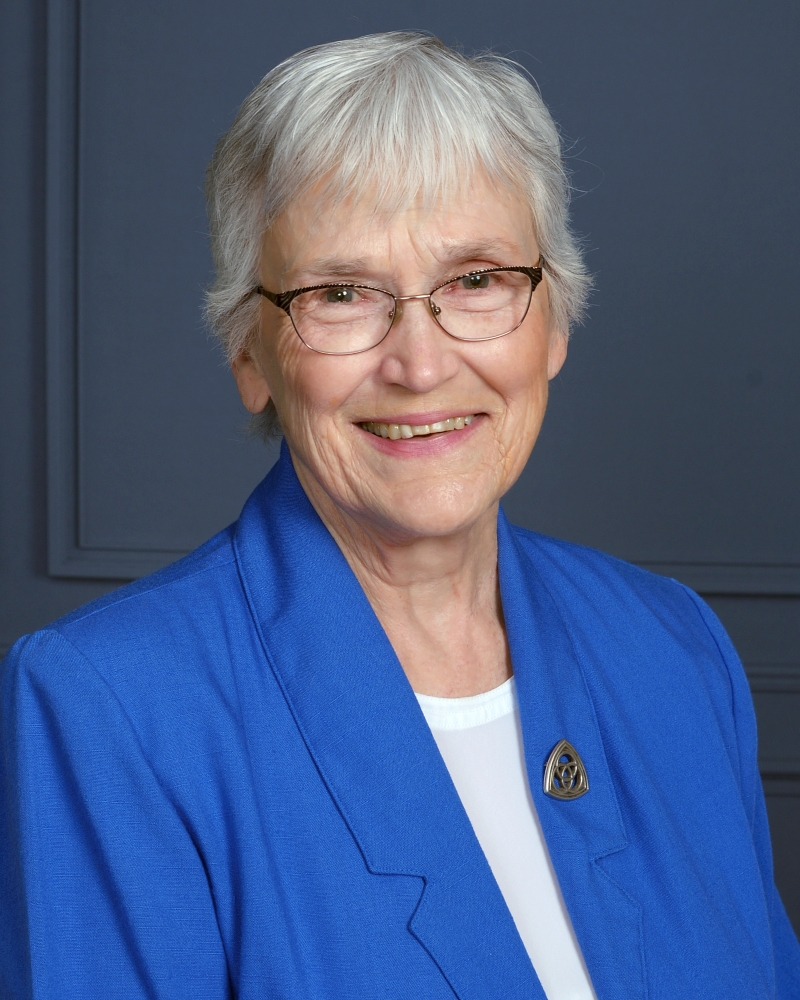 Sister Marilyn was a member of the first graduating class of La Roche University (Allison Park, PA) in 1965, graduating with a Bachelor of Science in Biology. She earned her Master of Science in Biology at St. Mary’s College in Winona, MN. Her teaching ministry included SS. Peter & Paul Elementary School in Beaver, PA (1965–66), St. Mary’s High School in McKees Rocks, PA (1966–68) and Canevin High School in Crafton, PA (1968-1973). In her ministry at La Roche University, she served as assistant professor of biology (1973-78), assistant to the academic dean (1978), acting dean for administration (1980), registrar (1981) and coordinator of community service (2000-2006). From 1982 to 1988, Sister Marilyn was director of the Newman Catholic Center at Wayne State University in Detroit. During this time, she began her ministry with and to persons with AIDS. Subsequently, she was one of the founding members of the AIDS Interfaith Network of Michigan and served as executive director (1986-96). In the Community, she served as the vocation director (1996-2000) and on the Provincial Leadership Team as a provincial councillor (2007-12). After a brief sabbatical, she served as the pastoral associate at St. Vincent de Paul Church in Wheeling, WV (2012-16). Since 2016, she has served as the house administrator for the Generalate in Wakefield, RI. She also volunteers with the St. Vincent de Paul Society in her home parish, St. Francis of Assisi in Wakefield.

Of what aspect of her religious life she has found most satisfying, rewarding and/or surprising, she says, "I was in AIDS ministry for over 14 years, eight of those years full-time. In the beginning years of the AIDS epidemic we did not know what caused this disease. Reactions to those with HIV and those who dared to support them were judgmental, sometimes even vicious. There were two diseases rampant at that time: AIDS and "Afraid-AIDS." I got involved when a colleague at Wayne State University asked me if I would be willing to serve on a committee to work with people with this new disease that was affecting gay and drug users. I had a biology and theology background so it made sense to me to join the committee. The committee became a non-profit organization serving the community with an AIDS hotline, Buddy system, various support groups, speakers for various civil and church groups. I developed their Volunteer training, training manual and was part of the creation of a variety of educational brochures. In the beginning we were driven by naively thinking/hoping knowledge of the disease would change behaviors. During this time, I saw how patients with AIDS and their loved ones were shunned by their clergy, pastors and congregations. The patients and families came to me to help them find a clergy person who would visit them and to whom they could talk. This led me to develop an AIDS Pastoral Training for clergy and church leaders and subsequently found AIDS Interfaith Network (AIN) of Michigan specifically for this purpose. When I left AIN, we had trained over 250 Pastoral Volunteers from every mainline church/synagogue in the Detroit area. The ministry was intense, but the prayer, emotional support and love the volunteers gave each other in our regular meetings enabled us to continue on. It was such a joyful privilege to know that as a community of faith-filled volunteers we held the experience of life, death, sickness, healing, frustration, hurt but also a deepening sense of a faithful, loving God in our hands and heart."

CLICK HERE to make a gift in honor of Sister Marilyn's 60th Jubilee.