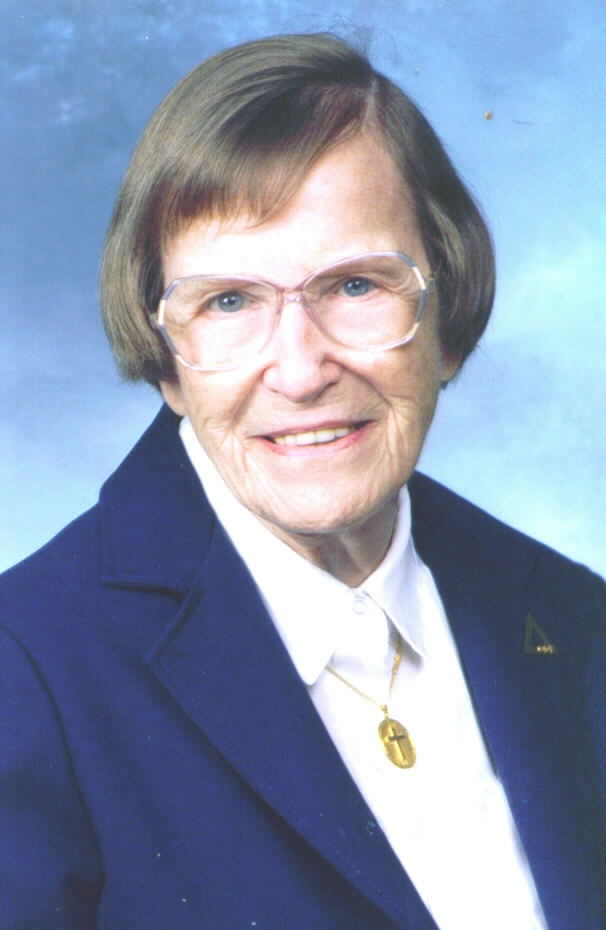 We commend to your charity the soul of our beloved
Sister Anna Maria Karrenbauer
who departed this life on August 12, 2011
in the seventy-fourth year of her religious life
Age: 94 years, 24 days
Funeral: Wednesday, August 17, 2011 at 4 p.m.

During these last long and arduous months, Sister Anna Maria’s silent prayer was focused on the very simple things of life: daily nourishment of mind, heart, and spirit, as well as physical and emotional “bread.” This “bread” came from her family, friends, and community members who surrounded her with their love and support. They nourished her spirit and gave her the courage to face the events of her life, especially after her stroke.

Named at birth Mary Dolores, Sister Anna Maria was the daughter of John and Mary Karrenbauer. She was one of eight children, having one sister and six brothers. Her sister Ruth came to visit her all the way from Oregon before her own recent call to eternal life. Sister Anna Maria was very close to family, especially her nieces and nephews and their children, her cousins, and many friends. A native of Mt. Oliver, nestled within the confines of Pittsburgh, Sister Anna Maria entered the community from St. Joseph parish on December 28, 1937.

Sister Anna Maria began ministering as a teacher for nine years, and then graduated with a Bachelor of Science Degree in Nursing from Duquesne University in 1952. She also obtained a degree in Anesthesia in 1959, and was certified as a Registered Nurse Anesthetist in 1970.

Beginning in 1952, her ministry in the health field took her to Divine Providence Hospital, Cambridge Springs, and then Braddock General Hospital. Providence would lead her to minister for eight years as a nurse at the Western State Correctional Institution in Pittsburgh, Pa. Her last nursing position was to minister as the night supervisor of nursing at Sherwood Oaks Nursing Home. She retired from nursing in 1993.

A lifelong learner and seeker, Sister Anna Maria received a certificate of “Touch for Healing” from the Health Dynamics Institute. She also pursued and was awarded two certificates in Reiki, becoming a Reiki practitioner. One who was always open to grow spiritually and mentally, Sister Anna Maria participated regularly in the programs at Kearns Spirituality Center and throughout the Pittsburgh area. While living in “retirement” at Providence Heights, Sister Anna Maria volunteered for many years as a chauffeur, telephone operator, and whatever else was asked of her. The fondest memory we will have of Sister Anna Maria was seeing her walking the Border Collie, Corky, around the grounds of Providence Heights, keeping the Canada geese in check. Being a faithful woman of Providence, Sister Anna Maria believed in her God, One who was present to her and fed her throughout her life. May we, who mourn her passing, remember her each time we pray the prayer that Jesus taught us, and believe as she did that God provides our daily bread, our daily needs through the love and care we share with one another as we make God’s Providence more visible in our world. As Sister Anna Maria enters eternal life, may her parents, relatives, and all our community members who have gone before her, be there to invite her to the Banquet Table of God, where she will be nourished for all eternity.

An obituary for Sister Anna Maria was in the Pittsburgh Post Gazette.

If you would like to make a gift to the Sisters of Divine Providence in memory of Sister Anna Maria, visit our donation page.