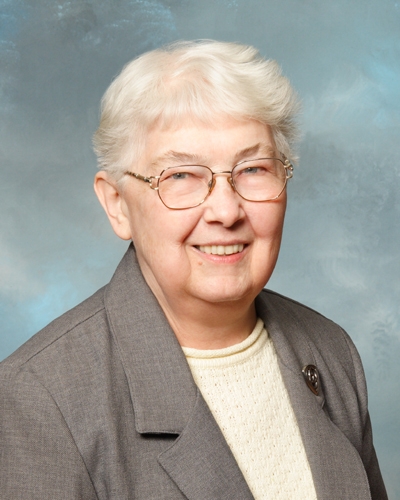 We commend to your charity the soul of our beloved
Sister Adele Kasper
who departed this life on February 5, 2016
in the sixty-ninth year of her religious life
Age:  84 years, 6 months, 14 days

We commit ourselves to making your Providence more visible in our world … with compassion, entering into the joys and sufferings of your people.

Patricia Kasper was the second of six children born to Genevieve (Englemeier) and Joseph Kasper.  Desiring to become a Sister, Patsy was a member of the first class of aspirants who came to Providence Villa.  What an experience it was for her to be a high school student and, at the same time, to learn about being a Sister!

As she entered the novitiate, Patsy was named Sister Adele.  She deepened her prayer life and experienced community living, studied the vows and prepared for a life of consecration and service.  Sister Adele began teaching immediately after first profession.  She was privileged to have joined a community of women, who were well-known in the Diocese of Pittsburgh for their excellence in education.  The Sisters provided daily assistance and mentoring to assure that Sister Adele had the support and guidance she needed to meet the students’ educational needs.  After completing her Bachelor of Education degree at Duquesne University, Sister Adele took education and theology classes at the University of Notre Dame.  During more than thirty-five years as a teacher and principal, Sister Adele served in Wheeling, WV and in western Pennsylvania, in Rochester, Springdale, Monaca, Castle Shannon, Greentree, Ford City, Overbrook, Duquesne, Glenshaw, Braddock, McKeesport, and in Allison Park at Providence Heights Alpha School.

Feeling called to serve poor people, Sister Adele moved to New York, where she reached out to those who were underserved.  She taught in Harlem and at St. Rose of Lima School among Spanish-speaking families.  Sister Adele lived and served for several years in Jeremiah’s Field on Manhattan’s Lower East Side.  Jeremiah’s Field was part of a network of projects which, in conjunction with Catholic Charities, assisted single women and women with children toward transitional and permanent housing.  Sister Adele and other sisters lived with small groups of women who were trying to become free of drugs and alcohol, forming community with them, sharing meals and living space, tutoring them and helping them gain confidence to become more independent.  Of these years, Sister Adele said, I have learned so much from these women, their simplicity of heart, and the struggles that they experience in their attempts to get their lives together.  Returning to Pittsburgh, Sister Adele continued sharing her gifts and meeting new needs.  She served the Sisters at the motherhouse, assisted with child care and cared for her mother until her death.

Sister Adele’s sweet disposition was evident throughout her life.  As a teacher and principal, her caring was shown in the excellence of her preparation and in the ways she made each child feel special.  In her years with the women in New York, her efforts to prepare them for life’s responsibilities was evident in her gentle and stable presence with them, in the midst of the daily struggles.  In her senior years, Sister Adele was available too, always caring, prayerful, and generous with her time and her gifts.  She loved walking and she enjoyed many opportunities to be with the Sisters, with the laity and with children.  Both Sisters and family members supported Sister Adele in her faith and in her life’s journey.  She made the Providence of God visible every day in multiple ways, especially in compassion, entering into the … sufferings of those she served, celebrating the joys and successes of each one, as well.  Now she has entered into the presence and perfect love of God.