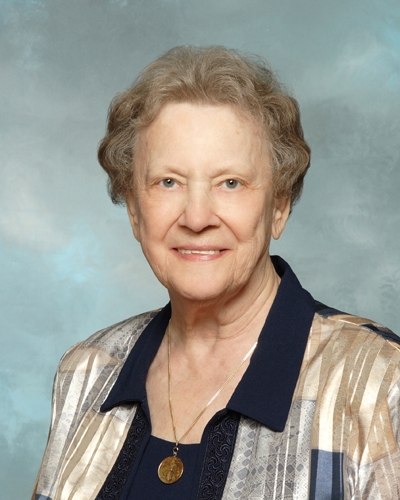 We commend to your charity the soul of our beloved
Sister Anna Marie Muck
who departed this life on September 16, 2017
In the seventy-third year of her religious life
Age: 89 years, 10 months, 4 days

Unexpectedly, on the morning of September 16, 2017 Sister Anna Marie (Jean Baptist) Muck entered into eternal life. The eleventh and youngest child of John Baptist and Rose (Gasser) Muck entered the Community in 1944, from St. Martin's Parish in the West End of Pittsburgh.

Sister Anna Marie’ s primary passion was Catholic Education. She began teaching when she was just twenty years old and continued in that ministry for the next 67 years! Her energetic and creative spirit was evident in and out of the classroom. A competent and dedicated school administrator, Anna Marie served as a principal in the Archdiocese of Detroit and in the Diocese of Pittsburgh. For many summers, Sister Anna Marie enjoyed ministering with her classmates at Camp Mishannock in Kingston, Massachusetts. Her students at Toner Institute and St. Joseph Military School both respected and loved her. However, it was Sister Anna Marie's devotion to the academic community at Providence Heights Alpha School which remains unrivaled. Significantly, her love for children extended from the Alpha School to Las Cañitas—an impoverished neighborhood along the Ozama River in Santo Domingo, Dominican Republic. Annually, she encouraged the children of the Alpha School to share their abundance with Pituca Flores, a school which houses more than 300 children who live in extreme social vulnerability.

Characterized by integrity and strength of character, Anna Marie was a woman of passionate ideals whose opinions were rarely ambiguous. “Mucky” enjoyed lively exchanges about politics, sports, theology, pedagogy, and religious life. Her patriotism was reflected not only in her spoken declarations, but in her choice of room decor and in her dress on national holidays. She bled "black and gold" cheering on the Steelers, Pirates, and Penguins. While she mellowed in more recent years, her fortitude and tenacity were nonetheless evident as she refused treatment for the cancer which caused painful suffering.

Sister Anna Marie was a woman who daily made God's Providence visible in her community life, her ministry, and her fidelity to prayer. We have no doubt that when the hour came, Anna Marie, who throughout her life generously gave whatever was needed, was not found wanting.

CLICK HERE to make a contribution in honor of Sister Anna Marie's memory.