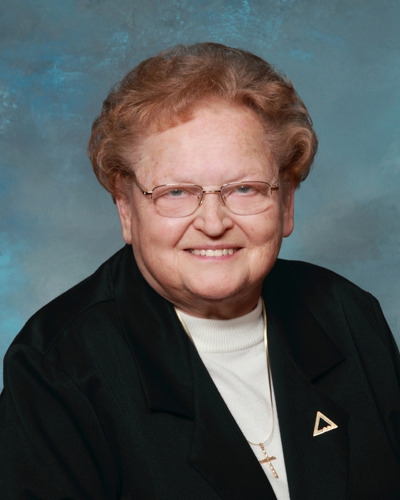 We commend to your charity the soul of our beloved
Sister Antoinette Basis
Who departed this life on April 25, 2018
In the seventy-first year of her religious life
Age: 88 years, 27 days

But those with insight shall shine brightly like the splendor of the firmament, and those who lead the many to justice shall be like the stars forever. Daniel 12: 3

Antoinette Basis was the daughter of Charles and Anna (Jacobs) Basis. She was an only child and was raised by her mother whom she described as a dear, devoted and untiring mother who was used to making many sacrifices. Antoinette’s first encounter with the Sisters of Divine Providence was at St. Peter and Paul's School in East Liberty. She continued her education at Divine Providence Academy, and then joined many other DPA alums in entering the Congregation of the Sisters of Divine Providence. She had made her first Communion when she was in the third grade and told her mother on that day that she wanted to be a sister. At the time of her Golden Jubilee, when asked her favorite quote, she responded: “I shall pass this way but once; any good that I can do I will do today as I shall not pass this way again.”

It was only after Antoinette was professed that she met cousins she never knew, Pat and Loretta. Loretta’s sons spoke of how she came often to visit them, and how much they all loved her. Antoinette and Loretta would make Christmas cookies together and they shared them with many people.

As Sister Demaris, she became an educator. She was a born teacher; she loved children and they loved her. When she became a kindergarten aide, after many years of having the sole responsibility in a classroom, the children related to her as if she were their grandmother. Unquestionably she did an immense amount of good as a teacher, as a human being and as a Sister of Divine Providence.

Her education included a bachelor’s degree in education from Duquesne University and a master’s in education from the University of Pittsburgh. When Sister Nancy Schnur began a master’s program at the University of Pittsburgh, Antoinette helped her navigate through all the paperwork and everything else that was required. They went to class together in the summers and studied together when they were taking the same courses (and did well together in statistics!). Antoinette’s mother had died at a very young age, and Nancy’s family became her family. Nancy regarded her as a gift given to her to help her in many ways.

Antoinette taught in schools in the Archdioceses of Boston and Detroit and the Diocese of Pittsburgh. She was at her beloved St. Sylvester's, in three different stints, for a total of 31 years. She spent the last 16 of those as a volunteer doing what needed to be done in the school, including tutoring. A cause near to her heart was assisting children who had difficulty learning, and so the tutoring gave her the opportunity to do just that.

As she struggled to breathe during her last illness, she continued to express her dependence on God who was her mainstay. At the time of her Golden Jubilee, when asked the question, “Who is God for me?” she responded, “God is a constant companion in the joys and trials of everyday life. Unchanging.” Now she is enjoying that companionship in a new way.

CLICK HERE to make a contribution in honor of Sister Antoinette's memory.