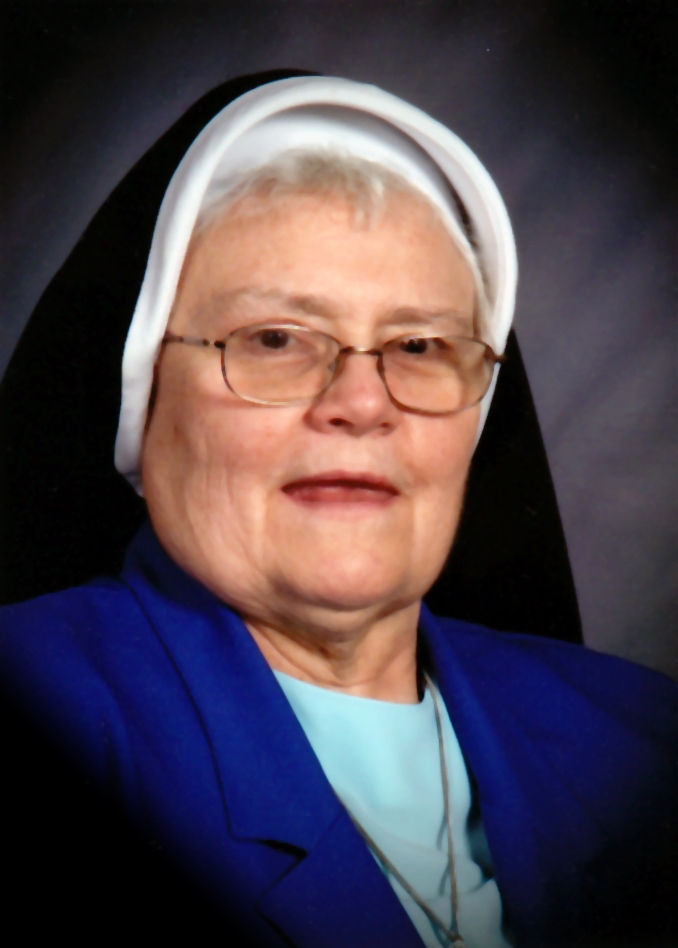 We commend to your charity the soul of our beloved
Sister Constance Kuttenkuler
who departed this life on November 15, 2015
in the sixty-fifth year of her religious life
Age:  79 years, 2 month, 26 days

“Come, you who are blessed by my Father, I was a child and you taught me, I was sick and you cared for me, I was a fragile plant and you nurtured me, I was lonely and you visited me…” [adapted from Matthew 25:34-36]

Constance Leola, the second of five children, was born in Tipton, Missouri to Leo and Alice (Fallert) Kuttenkuler.  She attended St. Andrew’s school where, through education with the Sisters of Divine Providence, she began to grow in faith and love of God.  In one place, she wrote about her decision to become a Sister, “I felt the call as far back as I can remember.”  Received into the community a week before her fifteenth birthday, she joined three other young women.  Together they happily prepared for religious life, even as they finished their high school studies.

Named Sister Francis Gabriel when she became a novice, Sister Connie returned to her baptismal name in 1969, when it became possible to do so.  She studied sociology and education at St. Louis University and Marillac College.  During those years, she also taught in Madison and Brussels, Illinois, in Normandy, Lemay, Florissant, and Bonnots Mill, Missouri, and in Shreveport, Louisiana.  As a teacher of young children, Sister Connie helped many children learn and develop their gifts, while also supporting their families.

In 1969, fifteen years after beginning as a teacher, Sister Connie asked to study nursing, writing that for many years it had been her desire to be a nurse.  She studied at Southern Illinois University, while also serving in ministry at St. Elizabeth Medical Center in Granite City, IL.  At first she was a nurse aide; eventually she became a psychiatric technician.  Later in life Sister Connie was involved in other ministries, serving as a pastoral minister with her sisters at Mount Providence, as a gardener, and as a home care provider.  During her lifetime, Sister Connie struggled with mental health issues, receiving help from professionals and from her Sisters who assisted her in many ways.  In 2002 when a large group of Sisters moved to St. Clare’s Villa, Sister Connie found new ways to reach out to others, praying with and for the other residents, offering her presence and time to them, and for a short period being involved in activities in the adult day care.

Though her ministry and her community life were always important to Sister Connie, her faith and spirituality were central to who she was.  Drawn ever more deeply into Eucharistic adoration and contemplative prayer, at one time she considered joining a newly-forming community dedicated to the Immaculate Hearts of Jesus and Mary.  In describing herself, Sister Connie wanted to be remembered as loving, spiritual, and trusting in God.  Sister Connie was a lover of God, a seeker, listening to her dreams, discerning her call to change her ministry, her local community, and even her belonging in the community of the Sisters of Divine Providence.  She wanted to be open to God in all the moments of her life.

Moving in her final years to St. Joseph Center in Pittsburgh, she described it as a “very happy, bright, and pleasant place to be.”  As Sister Connie joins the countless other Sisters of Divine Providence who have served God faithfully throughout their lives, we hear Jesus’ invitation repeated, “Come, you who are blessed by my Father, inherit the kingdom prepared for you from the foundation of the world.” [Matthew 25:34]