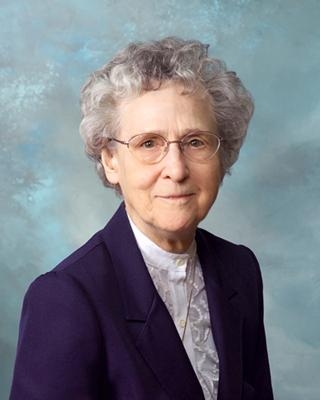 We commend to your charity the soul of our beloved
Sister Genevieve Brandstetter
who departed this life on October 28, 2015
in the eightieth year of her religious life
Age: 95 years, 10 months, 14 days

Sister Genevieve Brandstetter suffered a stroke on October 10, 2015 and was hospitalized.  Not being assured that she could make significant gains through medication and various forms of therapy, Sr. Genevieve wanted to return to St. Joseph Center at Providence Heights and live her remaining days among her Sisters in Community.  She passed into eternity quietly surrounded by the Sisters with whom she shared life.

Genevieve Brandstetter entered the community in 1936, from St. Mary’s Parish in Ford City, PA.  She was the elder of the two children born to Joseph Brandstetter and Hubertina Breitmyer. At investment, she was given the name Sister Generosa and later returned to her baptismal name.  Throughout her life in community, Sister Genevieve, responded to the needs of the time in which she was living.  The community, recognizing her innate talent in music, educated her in the discipline of music.  Both her degrees were from Duquesne University.  She earned a B.S. in Public School Music in 1953 and a Masters in Music in 1962.

Early on, Sr. Genevieve taught music in elementary and secondary schools in the Dioceses of Pittsburgh and Boston.  She was also certified to supervise music and her ministry included music supervision.  Because of her unique talent and ability, she often traveled between schools in order to provide a quality music program to the students in the schools we sponsored and/or staffed.  This often included after hours and Saturdays because she gave private lessons in piano and other instruments, particularly organ, violin and clarinet.  Even when not formally involved in music education, Sr. Genevieve continued to direct choirs, produce records that preserved the choral talent of the Community in the 1960’s, and volunteer her services at churches, nursing homes and residences for senior living as requested.  For many years, Sr. Genevieve served as director of liturgical music for the Community.

In 1957 Sr. Genevieve was called to serve as Director of Postulants, a position she held for 11 years during a critical time of Church history—a time during which we were called on to embrace the Holy Week reforms and other changes that came during and immediately following Vatican Council II.  Besides mentoring women who were in the initial stage of discerning a call to religious life, she taught them how to pray, which included the changes that came with Vatican II, sacramental prayer (Eucharist and Reconciliation), communal prayer, and contemplative prayer.   To do this well, she enrolled in additional courses at Duquesne University in Theology and Spirituality.  After her term, she worked with “new” formation teams to assist in teaching the history of the Community and telling the stories of the Sisters who had preceded us.  She took groups to the cemetery and told the stories of the Sisters interred there.   She served as our link to the original six Sisters who came to the United States from Germany in 1876 and helped us to get in touch with our deep story.   She also served a five-year term as a member of the Provincial Council.

In 1981, Sr. Genevieve began a new phase in ministry   engaging directly in social concerns. Throughout her ministerial life, she was inspired to radical Gospel life by Daniel Berrigan, SJ and Catherine de Hueck Doherty.  From 1981-93 she was a co-director (and founder) of St. Ambrose Manor, a residence for low-income senior citizens on Pittsburgh’s North Side.  On returning to the motherhouse, she was invited to be executive director of Divine Providence Foundation which housed the proceeds of the sale of Divine Providence Hospital.  In this capacity she oversaw the grants which went to public charitable works   another opportunity to continue her desire to be engaged in social ministry.

It was fitting that the last year of Sr. Genevieve’s life was spent during the year-long celebration of consecrated life.  Certainly, her life personified remembering the past with gratitude, living the present with passion and embracing the future with hope.  When Sr. Genevieve reflected on her own life at the time of her 75th Jubilee, she said   “My life can be reduced to a simple phrase:  All is Grace.”