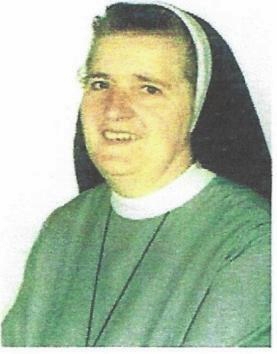 Emilie Hehn, born on 05.02.1932 in Mainz-Kastel, entered our congregation on 02.02.1956. Many years before her entrance, she got to know our Sisters as a helper in a kindergarten. From 1953 to 1954 she trained for childcare assistant and continued to work with the Sisters in the kindergarten. The good example of Sr. Eustolia motivated her to dedicate her life to God and to enter the community of the ”Sisters of Divine Providence."

After the closing of the convent she moved to Mainz-Finthen and served at the entrance and in the household. The people of Herrnsheim were faithful to her and came to visit her often.

In 2015, she had to move to the Motherhouse in Mainz together with two other Sisters, because of the overall renovation of the convent in Finthen. Before the end of the year, in November, she had to be brought to the nursing ward in Aschaffenburg because of her health condition. She spent there a cheerful time among her fellow Sisters. She was very well-liked by all the caretakers because of her cheerful personality. Homesickness for Finthen caught up with her again and again. In Finthen she felt at home. Again and again she enquired about the progress of the refurbishment measures and hoped to be able to move back to the convent in Finthen.

Unfortunately, it was impossible to fulfil her desire because of her increasing need for care and her frequent stays in hospital. Now God has given her an eternal home. He will stem her longing.

Her motto that also encouraged others was: “Always cheerful, God helps you along." In this saying she expressed her trust in the guidance of the wise providence of God.

We thank all of you who so lovingly cared for her and accompanied her with in a sisterly way.