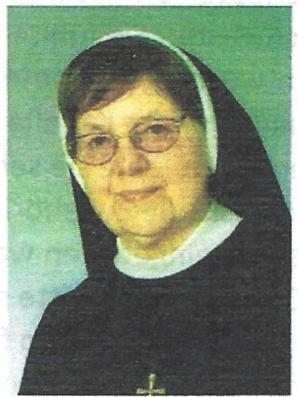 On Tuesday, January 15, 2019, in the late evening hours Sister Maria Rosina Hafner died at Klinikum Wasserlos/ Aschaffenburg. Two days before her death, she was still lively and cheerful amidst her fellow sisters.  Then she was seized by breathlessness so that she had to be admitted to the hospital.  Pneumonia on both sides weakened her small body very fast.  The Lord over life and death spared her a long suffering.

Sr. Rosina was born as Karolina Maria Häfner, in Buchen/Odenwald, on August 29, 1924.  After finishing elementary school, she attended an agricultural continuation school for two years in order to support her parents in their place for 10 years.

From 1951-1952, for one year, she prepared herself in a domestic science school for work in a different household and accepted a position in Karlsruhe far away from her family.  After three years, she quit the job in order to enter our congregation one year later.

On May 2, 1957, she was invested together with 12 other women.  On April 30, 1959, she professed her first vows, and in 1964, she professed her final vows. Thereafter, she was sent to our congregational owned hospital “Ketteler Krankenhaus" in Offenbach, in order to train for nursing.  After the exam in 1959, Sr. Rosina stayed in this hospital and was a member of the convent there until 1982.  She loved her profession and liked to be close to sick people.  With her quiet and caring ways, she served also as head of a ward until her transfer.  In 1982, she was sent to Aschaffenburg, in order to care for the sisters in retirement.  When, in 2004, the new nursing department St. Paul was inaugurated and more and more freelance co-workers started their service there, she was able to start her rightful retirement.

We experienced Sr. Rosina as a very quiet, always polite and accurate fellow sister. She felt responsible for our congregation and for the entire church and prayed a lot.  Even in old age, she would spend two hours in the chapel every day and hold adoration before the Blessed Sacrament.  Usually, she lived very withdrawn in her room.  Throughout her life, she felt a strong sense of belonging towards the 12 classmates of her course, with whom she had entered the congregation.  On May, 1, 2019, she would have celebrated her 60th anniversary as a religious together with five still-living classmates.

She was able to enjoy, for many years, the nursing, care and company in the same house, St. Paul, in which she had rendered her apostolic service for many years.  She died at the advanced age of nearly 95 years.  We will miss her silent and quiet ways very much.  In eternity, Sr. Rosina will continue to intercede for us.