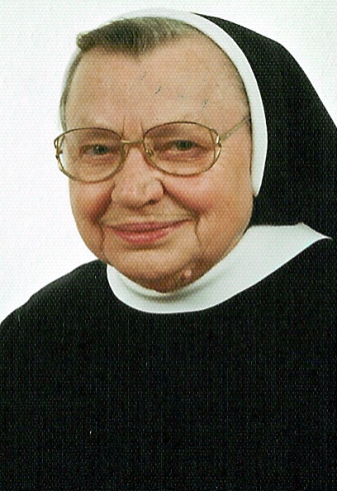 Sister Maria Stephana Gerbowitsch wrote these words for her 65th Jubilee in 2015.

On Wednesday, May 16, 2018, the Risen Christ called our dear Sister to Him. A long time it already had been her most fervent wish to be with the Lord forever.

Sr. Maria Stephana was born Elisabeth Gerbowitsch in Hungary on August 21, 1923, and entered school there, too. In 1944, her entire family was expelled from their homeland. After a short period in Lower Silesia and after the turmoil of war, the family came to a camp in Sandbach in the Forest of Odes. There all of them found protection and a new home.

In Marienhaus Sister Stephana got to know the Sisters of our Community. Soon she developed the decision to serve God in a religious community. In 1947, she was received into our Congregation in Aschaffenburg and there also she professed her first vows in 1950 and in 1955 her final vows. She had found a home and was ready for the service for the kingdom of God.

After formation for religious life in Aschaffenburg, she was able to do a training as a dressmaker in Paderborn. After attaining the necessary skills, she run the sewing school in Offenbach, St. Josef from 1956 - 1959 and also served in the care of the sick.

In 1966, she was called to Aschaffenburg in order to take on the service in the sacristy of the former provincial house. She was always available for various services in the house. She was responsible for the kitchen garden which was at that time an important source for food for the convent. In later years, as long as she was able she cared for the flower garden together with Sister Asteria.

Sr. Stephana had knowledge about all matters in the house and in the garden. As a car driver she was always willing to do the necessary rides and errands. She had quite a robust health and after retirement suffered from lack of strength.

Since 1966 until her death, Sr. Stephana belonged to the “old hand of Aschaffenburg.“ In her last years at the nursing ward she was a sociable and patient fellow sister for everyone. We thank the co-workers at the nursing ward for their attentive and loving care of each sister, the chaplain, Father Ludwig, for all the comfort and consolation for our elderly sisters whether they are healthy or sick.

Sr. Stephana will now be united with the Lord forever and remember us.

Funeral: Tuesday, 5/22/2018 at 2 p.m. at the cemetery
Altstadtfriedhof in Aschaffenburg
Afterwards: Eucharistiefeier in der Klosterkapelle/ Aschaffenburg