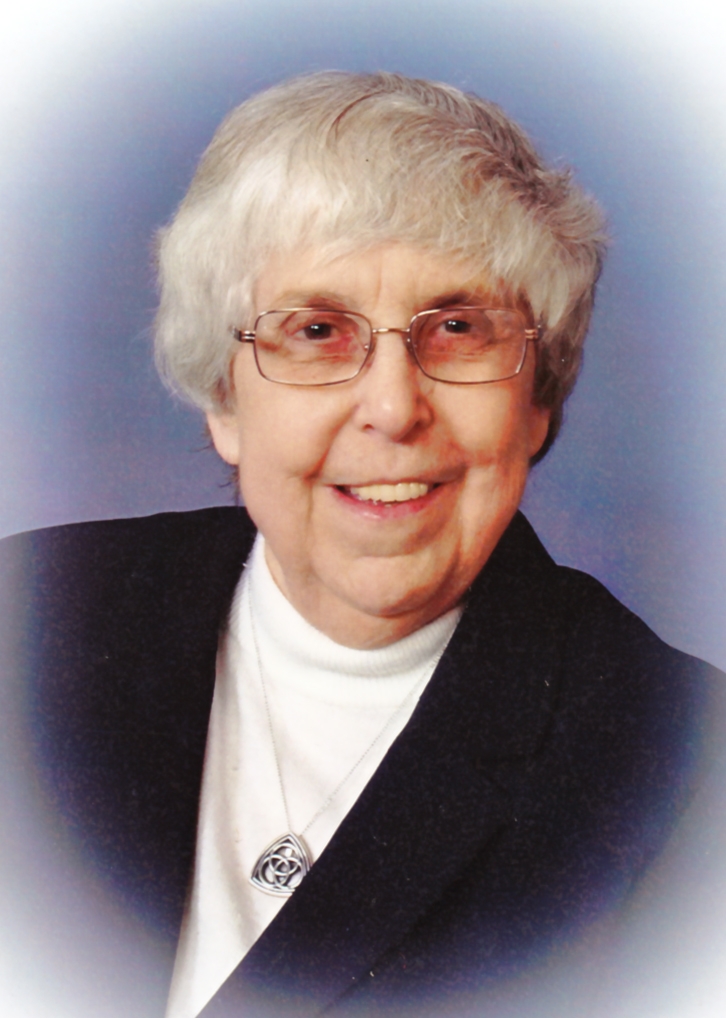 We commend to your charity the soul of our beloved
Sister Marjorie Nickel
Who departed this life on May 24, 2019
In the seventy-second year of her religious life
Age: 88 years, 7 months, 12 days
Liturgy of Resurrection: Saturday, June 1, 2019 at 11:00 a.m., Providence House Chapel – Kingston, MA

“When you are in the eternal, you are outside of nothing.  You are within everything, enjoying the fullest participation.  There is no more separation.  It is … where the eye with which you see God is God’s eye seeing you.  You are embraced in the purest circle of love. ” —John O’Donohue

Marjorie Ann Nickel was born October 13, 1930, in Carrick, PA, the daughter of Frank G. Nickel and Collette B. (Gaugler) Nickel. She had two older brothers, Frank and Robert and one younger brother, Bernard. After the early death of his wife, Marjorie’s father remarried. He and her stepmother, Dorothy, had two more children, Marjorie’s sister, Donna, and her brother, Albert. In addition to her parents, Frank and Collette, she was predeceased by her brothers, Frank, Robert, Bernard, Albert and her stepmother Dorothy Wiefling Nickel. Surviving is her sister, Donna of Winter Park, FL, along with several nieces and nephews.

On September 7, 1947, Marjorie entered the Congregation in Allison Park, PA. As a novice, she was given the name, Sr. Bernard Mary. She later returned to her baptismal name, Sr. Marjorie. Following her Novitiate years, she became a teacher and ministered in the Pittsburgh area at St. Martin, Divine Providence Villa and St. Basil High School. In 1959, she completed her Bachelor of Education degree at Duquesne University. Prior to this, Marjorie moved to Kingston, MA, and was engaged in education at Sacred Heart High School as a teacher, department head and Assistant Principal. During this time she completed her Master of Arts in English in 1967 at the University of Notre Dame. In 1974, she received her Ph.D. in English at the University of Notre Dame.   From 1974-1979, she served as Assistant Professor of English at La Roche College, as well as the On-Campus Coordinator for the Small College Consortium. Coming back to New England in 1979, Sr. Marjorie served for the next 10 years at Assumption College in Worcester, MA, first as Assistant Dean of Academic Affairs and then as Dean of Graduate Studies and Continuing Education. Marjorie served for 10 years as a member of the Provincial Council for Our Lady Province. In 1990, Sr. Marjorie began her tenure as Principal of Sacred Heart High School in Kingston. At the end of her term, she became the first Director of Development for Our Lady Province and continued working in Development in a collaborative way in the Marie de la Roche Province. In this work, Marjorie kept active contact with donors and was especially faithful in communicating with the alumni of Sacred Heart Schools.

When our Peruvian Sisters first came to Kingston, Marjorie graciously served as their initial ESL teacher. She not only taught them to read and speak English, but took them on guided tours of significant places in the area and beyond, expanding their knowledge of the culture of North America. Marjorie had many and varied interests. She was especially interested in family genealogy and worked diligently to coauthor the Nickel family history. Her circle of love now widens, as she joins her mother, father, stepmother, brothers, other loved ones and her Sisters in Community in the eternal joys of our Provident God.

CLICK HERE to make a contribution in honor of Sister Marjorie's memory.