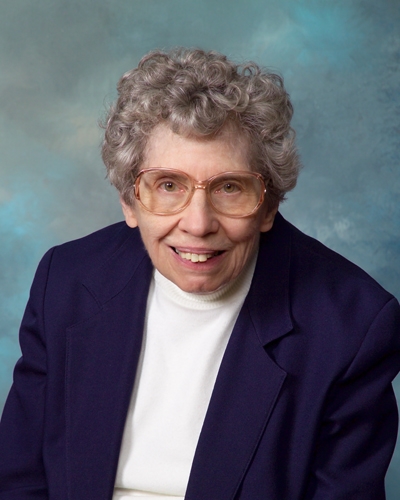 We commend to your charity the soul of our beloved
Sister Michele Ransil
who departed this life on July 26, 2015
in the seventieth year of her religious life
Age: 88 years, 9 months, 0 days

The Easter Season is a period of adjustment, a time to confront the empty tomb, to acknowledge the invitation to new life. It is a time to grieve what is passing, a period of letting go, a time to welcome new life. It was during this time that Sr. Michele Ransil began her final journey to God. Sr. Michele fell in April and broke her hip. Following surgery she contracted pneumonia. While she recovered there was a lingering weakness in her lungs. She once again developed pneumonia in mid-July. She knew it was her time to complete the journey she had begun. How fitting that this would occur as the Church celebrates the feast of Mary Magdalen.

Mary Louise Ransil was the eldest of the eight children of Louise Berhalter and Raymond A. Ransil. She entered the Congregation in 1945 from St. Norbert’s Parish in Overbrook. She was attracted to the Congregation through the Sisters who taught her at Divine Providence Academy. She traveled from Overbrook to East Liberty daily taking two streetcars in each direction for the four years that she attended DPA. After working for a year, her parents agreed to let her enter the convent.

Sr. Michele began her teaching career following first profession and taught in elementary and secondary schools in the Pittsburgh Diocese for 23 years. She taught at her beloved alma mater for seven years. At the core of who she was, Michele was an intellectual, a scholar. After receiving a B.A. in Education and an M.A. in English from Duquesne University, Michele pursued a Master’s Degree in Library Science from the University of Pittsburgh. It was her hope that she could be of service to the community at the newly established John J. Wright Library at La Roche College. After three years at LRC, Michele pursued a position at Bryn Mawr College in Pennsylvania and then found a home at the Alexander M. Bracken Library at Ball State University in Muncie, IN. She served at Ball State for 15 years. She held many positions at the library; her last position was Library Automation Project Coordinator and Associate Professor of Library Science. As an employee at Ball State, she had the opportunity for another degree. This last degree was a Master of Arts in Executive Development for Public Service. So it was no wonder that Michele was involved in many volunteer services. She organized the Newman-Assisi Library over a period of three years. After taking classes in architecture, she became a faithful volunteer for Habitat for Humanity. When the physical work of building became too difficult for her, she designed houses and served as secretary for the Ball State University Chapter of Habitat.

After retiring from Ball State University in 1993, Sr. Michele began collaborating with Father Mark Gruber by transcribing his retreat lectures into books. Following her work with Fr. Mark, Michele began collaborating with other Benedictines, as well as Redemptorists, Carthusians, and Dominicans. She worked as the final copy editor for the dissertations of priests from Latrobe to California. She also worked on priests’ dissertations in other countries, including England, Germany, Switzerland, India and Rome. Many of the dissertations resulted in books for which she also served as copy editor. Michele commented that she enjoyed this work because it was what she did well—and she learned so much and was inspired by the words she edited. Her last ministry was with Fr. Timothy Kruthaupf, former pastor at Holy Family Parish in Latrobe. Because she found his homilies so spiritually nourishing, she recorded and transcribed his homilies as well. She joined the ministry group at Holy Family Parish and ministered in a program they called “Meals on the Boulevard” feeding the homeless under the bridges in Pittsburgh. The program involved socializing with the homeless, as well as feeding them. She also joined the ministry group that prayed silently at an abortion clinic in East Liberty. Michele was able to continue these ministries even after she moved back to Providence Heights.

As Sr. Michele confronted her last illness at the hospital, her words to those who were attending her were “What am I supposed to do now?” It was easy to say to her, “You are done working. You can just rest now in the arms of a loving God whom you have served so well and so long. Just to be is a blessing…just to be is holy.”