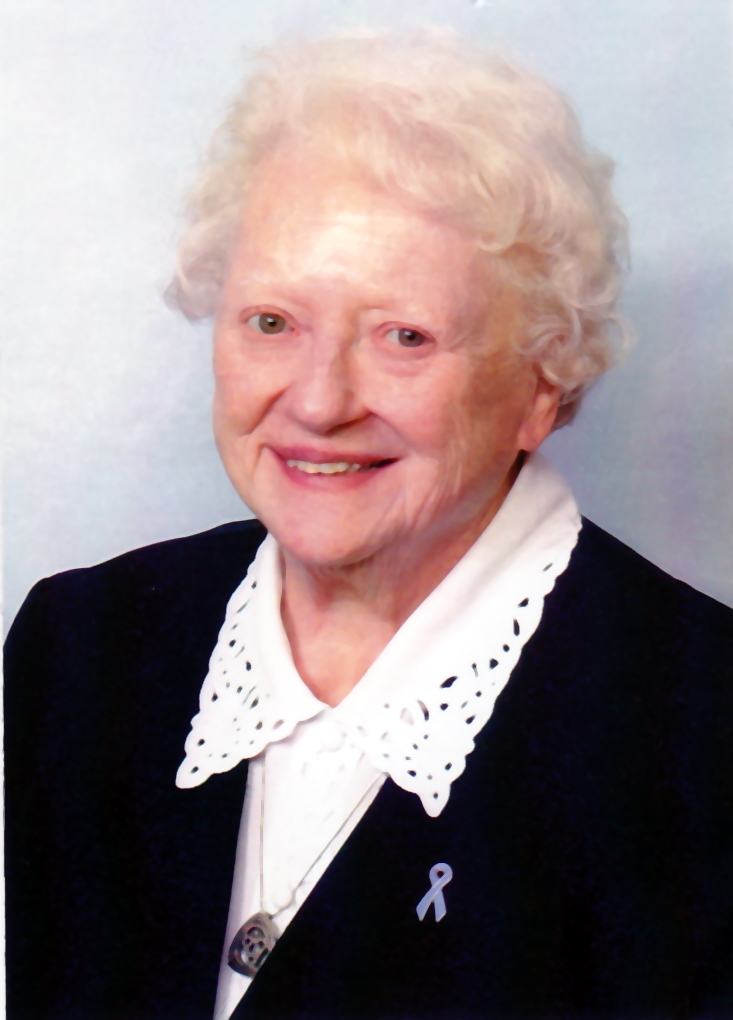 We commend to your charity the soul of our beloved
Sister Patrice Hessman
who departed this life on October 25, 2015
in the sixty-ninth year of her religious life
Age:  86 years, 4 months, 11 days

Who shall find a Providence woman?  …  She offers to all her life of passionate caring…  Strength and dignity are her clothing and she laughs at the time to come knowing that God will care for her… [Sister Myra Rodgers CDP]

Anna Kathleen Hessman was the second of five children born to Anna (Weekes) and John Hessman.  While in elementary school in Altoona, PA, Anna met Sister Albertine Bock CDP whose brother was pastor of the local parish.  Sister Albertine promised to pray for her and continued praying long after Anna moved to Washington DC.  Sister Albertine asked her good friend, Sister Melania Heyl, to continue praying for Anna when she herself became ill, so that long after when Anna entered the community, she heard the story of their remembrance of her.  As a child, Anna hoped to be a nurse.  One teacher told her that if she entered the convent she could become a nursing Sister.  Circumstances eventually led Anna to school at Divine Providence Academy, and within three months, having been influenced by observing the Sisters, she applied and was received into the community, being given the name Sister Patrice.

After completing her novitiate, she taught in the Pittsburgh diocese, until her move to New England in the early 1950’s.  In Massachusetts, Sister Patrice taught at Sacred Heart School in Plymouth and then Kingston, in Orleans and South Weymouth; she also taught in Stamford, CT.  During her time as a teacher, Sister Patrice earned degrees in education and psychology.

After many years as a teacher, Sister Patrice pursued her life-long dream of becoming a nurse.  She became an RN and served as staff nurse and in crisis intervention at South Shore Hospital, Weymouth MA, as staff nurse and in triage in Sun City AZ, and in other medical facilities.  Many were the accolades for Sister Patrice including excellence in clinical skills and in knowledge of patient’s symptoms and illnesses.  One doctor wrote, I know of nobody more admirable…  You have to see the way she works; the consummate professionalism, the irreverent humor, the benevolent manner; her consuming care of her patients and her friends…

During her years as a teacher and as a nurse, Sister Patrice was always looking for ways to encourage and support young women to learn more about the Sisters and their lives, to learn about their faith and God’s call in their lives, and to understand God’s desire for ministry to care for those in need.  She began vocation groups in more than one parish and always expressed concern for her co-workers, desiring they find their path in life.

As a nurse, Sister Patrice was known for the presence she offered patients in her care, as she listened and offered emotional support to them and their families. When she was Director of the Associates, Sister Patrice built new relationships seeking to be available to these women and men in prayer and support.  Sister Patrice described herself as hospitable and sensitive, blessed and gracious.  She maintained long-term contact with former students, with co-workers, and with many friends.  It was important for her in her retirement to keep in touch with family and friends, as she invited many of them to visit and stay for a meal with the Sisters.

Sister Patrice wrote, My life has been blessed by so many surprises, planned by the Holy Spirit and so often I receive the grace to recognize the gifts that intersperse some very difficult times.  In another place, she wrote, The blessings of God’s wonderful Divine Providence have been an ever-awesome Presence to me.  Now we ask God to Give her a reward of her labor and let her works praise her at the city gates [S. Myra Rodgers CDP]