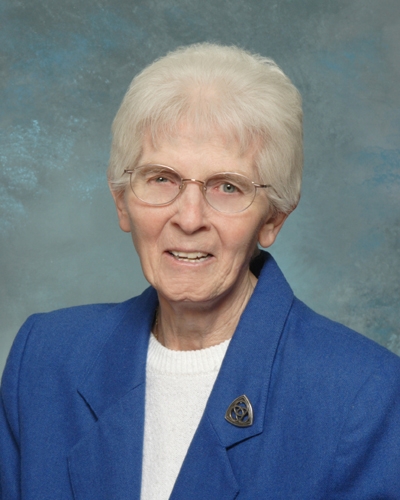 We commend to your charity the soul of our beloved Sister Rita Bracht, who departed this life on September 18, 2014 , in the sixty-ninth year of her religious life; age: 87 years, 10 months, 14 days.

Sister Rita Bracht, who now most assuredly is singing with all the choirs of angels, exemplified this maxim of St. Augustine.

Sister Rita lived a life that was much to sing about. She was the youngest of seven sons and daughters of Margaret (Centner) and William Henry Bracht. She outlived her siblings Mark, Rev. Lewis, Mary Ida McDonough, Margaret, Anna Fortwangler, and Dorothea Hock.

Growing up, she attended SS. Peter and Paul grade school and Divine Providence Academy, and after graduation, she entered the Congregation of the Sisters of Divine Providence. She lived her entire religious as an educator: as teacher, principal, administrative assistant for the diocese or a school, or as school librarian. Sister Rita also ministered as an educator in the Archdiocese of Detroit and the Diocese of Pittsburgh, north, south, east and west. She was educated for this work at Duquesne University and St. Francis College, Loretto.

“Aunt Rita” was very, very close to family, her sisters first of all, and then all their children, some of whom are now grandparents. When the next generation would make First Communion or be confirmed, they were whisked off to visit Aunt Rita, who celebrated with them. Several years ago, she had the opportunity to visit in the Southwest. She visited a niece for whom she was godmother. They went to the Grand Canyon, and Aunt Rita was able to enjoy the beauty of it. She and all her sisters were a very good influence on the next generation of the family.

The family remembers her as a lovely lady, with faith and courage, who was very inspiring. She told one of her nephews that she wished she could be like her mother, and he told her she was. He was very much aware of her courage in facing death.

Rita’s spiritual director experienced her as a faith-full woman. When she prayed, she prayed with art. She would draw her prayer.

But it is her singing that most of us will remember. She had the most beautiful voice; her friends encouraged her singing, and she was one of the singers in her family. As an elementary school teacher, she used the perfect instrument, her voice, to teach music. She sang in church choirs; at Providence Heights, she was a wonderful cantor and prayer leader. After her illness earlier this year, she did not have the breath to sing; however, just recently, she started attending choir practice again and was very happy to be able to be singing.

When Rita was a student at Divine Providence Academy, an all-girl school, she had the role of the prince in the musical The Student Prince. Perhaps her song is now the song of the prince, when he was called home:

“I'll walk with God from this day on … There is no death though eyes grow dim; There is no fear when I'm near to Him, I'll lean on Him forever, And He'll forsake me never … His hand will guide my path aright, And I'll never walk alone, While I walk with God.”

Read Sister Rita Bracht's profile from the Meet Us section of our site, posted before her death.

If you would like to make a gift to the Sisters of Divine Providence in memory of Sister Rita visit our donation page.