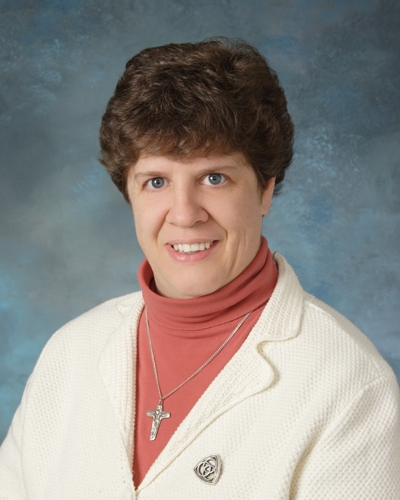 Sister Judith Connor grew up in a family of eight children. She had no aspiration to become a Sister. She attended public school, went to a state college, and is from a Catholic family that only practiced the faith sporadically (they made the sacraments and attended Mass on holidays). She hadn’t even been acquainted with a Sister until she was 27 years old; however, when she took an aptitude test in her junior year of high school, one of the suggestions was “nun.” She had a good laugh over that at the time.

Sister Judy has always had a strong interest in social justice and in serving the needs of the less fortunate. Her interest in the welfare of others was greatly influenced by her sister, who is a passionate believer in the rights and dignity of all human beings. She majored in sociology in college, and soon after, she landed a job as a social worker for the Department of Mental Retardation in South Carolina.

Over the next few years, she felt that something was missing from her life. During this time, she also became friends with a number of people who were serious about their Christian faith. While this wasn’t the main attraction for their friendship, she found herself wanting to know more of this faith. She discovered that what she was aching for was a life of service rooted in the Gospels. Through a volunteer opportunity with the Daughters of Charity, she experienced firsthand what it meant to be part of an intentional faith community. After spending two years with their community, she decided to move on, but she continued to believe that God was calling her. In 1997, she became a long-term volunteer with the Sisters of Divine Providence. In 1999, she entered their Community and professed her final vows in 2004.

From 2003 to 2007, Sister Judy taught Spanish and religion at Sacred Heart Intermediate School in Kingston, Mass. At the Marie de la Roche Province in Pittsburgh, Pa., she was the director of Providence Companions in Mission (2007–09) and vocation minister (2008–09). She was a caseworker for Catholic Charities in 2011, and worked as a driver and advisor for ACHIEVA in 2011–12. At present, she is a social work therapist with Staunton Clinic in Pittsburgh. She will complete her master’s in social work at the University of Pittsburgh in April 2014.

Of her life as a religious, Sister Judy says, “Most often I find that people are surprised at how ordinary we are. I enjoy the same things as most people. I like reading, watching TV, playing games, and going to a movie. I can’t stand to iron clothes, scrub the bathroom, or stand in line to get my driver’s license renewed.”